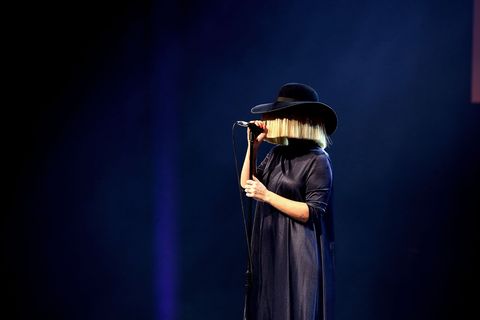 As we speak, Maddie Ziegler is being fitted for another platinum-blonde wig and warming up her face muscles so she doesn't get a cramp contorting her eyebrows. This can only mean one thing: new Sia single.

Like pretty much all of the artist's other songs, "Alive" is about being sad but finding the strength to be less sad, a theme one could also apply to most of co-writer Adele's work.

"It's about Adele's life, so I now sing a song from Adele's perspective," Sia said in a recent interview with NME. "This is the first song from this new project. I'm calling it This Is Acting because they are songs I was writing for other people, so I didn't go into it thinking, 'This is something I would say'. It's more like play-acting. It's fun."

Chelsea Peng I'm Chelsea Peng, the assistant editor at MarieClaire.com.
Advertisement - Continue Reading Below
More From Culture
19 Most Underrated Films of All Time
The Music Podcasts We Keep Pressing Play On
Advertisement - Continue Reading Below
Why You Keep Seeing "Until Tomorrow" on Instagram
The 19 Best Murder Mystery Movies
How to Join Marie Claire's Online Book Club
'In Five Years' Is MC's April Book Club Pick
'Little Fires Everywhere' Is a '90s Time Capsule
How Murtagh Dies in the Outlander Books
What Happened to John Finlay From 'Tiger King'?
'Outlander' Season 5 Is Back to the Show We Love