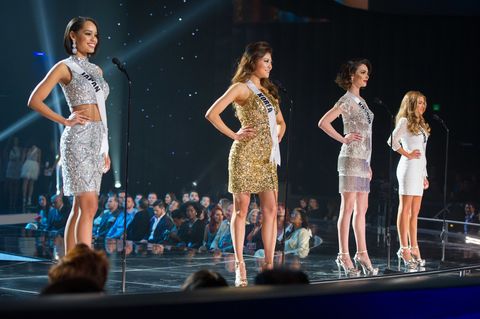 Miss Universe contestants—they're just like us! Sort of. Less the sequins and hairspray, more the coping with haters. Specifically the sort that exist mostly in Instagram comments, mean Tweets, and Facebook trash talk. As the Miss Universe contestants gear up in Las Vegas for this weekend's Miss Universe 2015, airing on Fox on Sunday, some have unexpectedly bonded over an all-to-common enemy: the internet troll.

Take, for instance, Joanna Cooper, the 21-year-old Miss Ireland. She'd barely had a chance to wear her crown after her win late this year when she started noticing something she had never experienced before—online commentary, on locals news outlets, critiquing her physique.  She was too thin, they claimed—she needed a "white bread sandwich"; another wanted her address, so he could send her a "pasty," an Irish word for a sweet treat. The comments weren't exactly cruel—but it still stung. "I was really offended at first," she says.

Having to endure, ignore, or block online trolls comes with the territory of celebrity these days; it's just that for pageant queens, national fame comes practically overnight, which means the backlash does, too. "I've gotten really close to the girls, and we've spoken about it," says Cooper. "It's nice to hear we're all human, we're all in the same boat—we all get the negative comments."

Sometimes fan pages devoted to the pageant are overrun by takedown battles between devotees of particular contestants. "It turns into a war about two contestants and whether their breasts are appropriate size or not," says 27-year-old Olivia Jordan, Miss USA. "It's bizarre." Jordan admits that she has not entirely learned to shake off the negative feedback. "Sometimes I'll be on my way out, and I'll think, 'This outfit isn't so flattering,' and maybe I'm thinking about my hips. Then, the next day, all the comments are 'Miss USA has gained weight! She looks awful! Her hips!' Those were the tiny voices I was able to shut down the night before—and then it comes out the next day that everybody had noticed those same things. Those moments are hard."

"It turns into a war about two contestants and whether their breasts are appropriate size or not."

Jessie Jazz Vuijk, Miss Netherlands, doesn't blame some girls for glamming it up for selfies. But she's trying to resist the urge to create an inauthentic version of herself on social media. "I'm not going to post a really ugly picture of me," she says, "but I also try to show pictures of me without makeup, and show the real version. Especially for younger girls who are trying to have someone to look up to, to do a reality check." She's not totally alone: At least ten women in the pageant have posted photos of themselves without a stitch of makeup on twitter along with the hashtag #confidentlybeautiful.

"All the magazines are photoshopped, there's a lot of makeup that can make you look your best," Vujik says. "But I'm trying to be the person who combines being a beauty queen—with a lot of makeup and big hair—with also just being a normal girl who watches Netflix all day and stays in her pajamas."