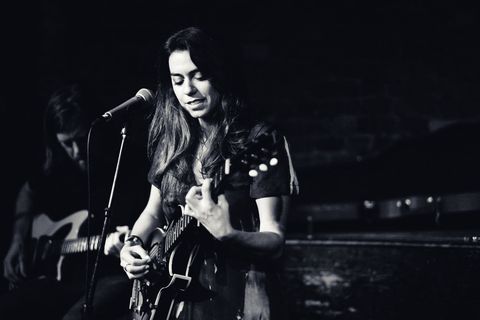 In Haroula Rose's world, waves break beneath a cyan sky and Coney Island isn't sweaty and crowded (for once) but filtered like the Tumblr-dash trophy of your dreams. Oh, and the soundtrack? Whispery and percussion-driven with a recurring "DOO-doo doo doo DOO" bit that's guaranteed to get stuck in your head.

From the L.A. singer/songwriter's forthcoming album Here the Blue River (out in March), the music video for "Moon and Waves" premieres exclusively on Marie Claire. "It is a song poem about looking at the world from a curious perspective and noticing how everything is interrelated and connected in some way," said the one-time associate producer/music supervisor on the critically acclaimed film Fruitvale Station. "I like to think people aren't so different from each other, really."

Pro tip: Wait until you're alone, sprawl out on your Navajo rug, then watch these visuals. Prime conditions for feeling a *lot* of feels.