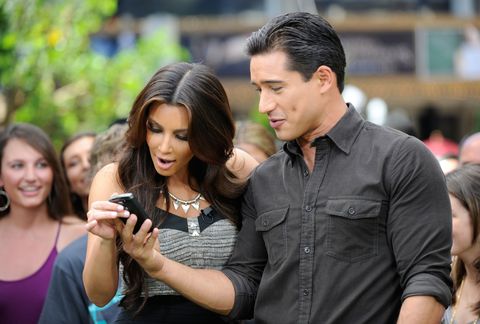 Probably don't start rubbing your hands together at the thought of unleashing your "Fire GIFs" folder onto the unsuspected hordes of Twitter—there *might* be a button for that, but according to TNW News, it might just direct you to what is basically someone with not as good taste's camera roll. Laaaaame.

Earlier this week, some tweeple noticed a new feature positioned between the photo and poll features, which reportedly let users browse trending GIFs and a selection of other images sorted into mood categories. So…just like Facebook messenger and Tumblr. Except now it's gone.

But hey! They're definitely going to need some help populating the library, so show some initiative and put in your application now for Chief Executive Graphics Interchange Format Curator. I hear the benefits are 👌.

Chelsea Peng I'm Chelsea Peng, the assistant editor at MarieClaire.com.
Advertisement - Continue Reading Below
More From Culture
'Good Girls' Is Back for an Explosive Season 3
Netflix's 'Haunting of Hill House' Will Return
Advertisement - Continue Reading Below
Criminal Minds Season 15 Will Be Its Last
The Hot New Podcasts to Add to Your Queue
Who Are the Women of 'The Bachelor' in 2020?
Join Marie Claire's Virtual Monthly Book Club