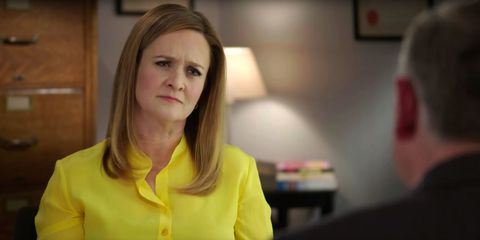 While John Oliver's Donald Trump tirade is dominating your Facebook feed, fellow Daily Show alum Samantha Bee has been quietly killing it, and you need to start paying attention. This week on Full Frontal, she tackled Texas's restrictive HB-2 abortion law, which is about to be argued at the Supreme Court. Bee's segment is the perfect combination of humor, facts, and, oh you know, *logic*—and it's a must-watch.

Bee interviewed Texas Rep. Dan Flynn, who co-authored the law, and the result showed a stunning lack of knowledge about abortion and the effects of his restrictive policies on women in his state. Rep. Flynn insists that the law was improving women's healthcare. "Every time you start cutting open people's bodies, you need to have it in a procedure where it can be healthy," Flynn said. "Absolutely. You don't cut a woman in an abortion, though," Bee calmly corrected him.

"I'm not a doctor, I don't know, but I listened to many doctors tell me about the procedures that happen when you do an invasive surgery," Flynn said. "You don't seem to know anything, specifically, about abortion, really at all," Bee said.

Bee also cited actual academic research to show that more women are self-inducing abortions, but Flynn refused to admit that the problem even exists. "Have you thought about regulating the safety of back alleys? Because that's where a lot of women will be having their abortions now," Bee said. And though Bee comes up with some clever ideas to pump up the pro-choice movement, the segment leaves you feeling furious—and not too hopeful about the future of reproductive rights in this country.