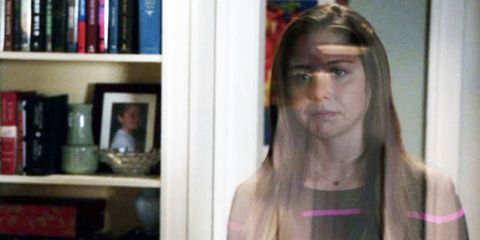 The Good Wife has seen characters leave the show in a variety of ways: dramatic exits (Will Gardner getting shot in a court room), green-screened exits (Alicia and Kalinda's final drink), and unexplained exits (Robin the investigator's probably still showing up at the warehouse office space, day after day, wondering where everyone has gone).

But it's Grace Florrick, played by Makenzie Vega with a lovely mixture of earnestness and sullenness, who made the most intriguing exit in the show's history—she vanished while still remaining on screen.

During the entirety of season 6, Grace Florrick almost strictly appeared in scenes in or near Alicia's apartment, often only with Alicia.

There is only one explanation: Grace Florrick is a ghost, bound to her mother's apartment.

Grace's spectral house arrest begins at the beginning of sixth season, so it's worth considering where and what could have happened in between season 5 and season 6. There was no time jump in between the two seasons—the season 5 finale ended with Eli asking Alicia a question, and season 6 began with her responding.

There is only one explanation: Grace Florrick is a ghost, bound to her mother's apartment.

In the season 5 finale episode, Alicia's mother Veronica and Peter's mother Jackie snipe over a bottle of red wine. Grace arrives, sees the wine and looks worried (or maybe not—Grace does have a case of Resting Dismayed Face).

"Oh no, both Grandmas are hitting the red in the afternoon again."

Jackie gives Grace a cold stare as she downs her glass of vino. Does Grace know too much about something? Anyone who thinks Jackie wouldn't strangle her granddaughter with a tasteful scarf to protect her family's honor is simply deluded. (The Kennedys did this all the time.)

Then there is Zach. Earlier in the same episode, he plans to drive to college the next day. At the end of the episode, Zach has decided to leave that same night instead of the next day. Why in such a hurry, Zach?

A final look back at his childhood, or the relief of someone just barely escaping the consequences of his actions?

We can safely rule out Alicia as the murderer—she has an alibi pretty consistently throughout the episode, working for most of the day and staying late at a meeting in which Diane Lockhart offers to join Florrick/Agos. Peter can also likely be ruled out—murdering his daughter would take time away from banging Ramona, his terrible, terrible lawyer.

Did Grace perhaps commit suicide? My gut says no: While she has parents who seem to remember her about once a financial quarter, the Bible is clear on suicide. See Ecclesiastes 7:17: "Be not over much wicked, neither be you foolish: why should you die before your time?"

We will likely never know why or how Grace died. We can say definitely that Grace's ghost first appears in the episode 3 of season 6, "Dear God." Forced into a form of arbitration that allows for Biblical evidence, Alicia finds she must rely on Bible verses to make her case. The phantasmal Grace readily jumps in to help.

Much like being a devout Christian, being a ghost doesn't mean you can't have fun and some good laughs from time to time.

Episode 4 is an an interesting one. While Eli Gold and future campaign manager (and hilariously named) Johnny Elfman argue in the hallway, Grace and a large group of her school friends appear in the hallway. Both Eli and Johnny clearly see her and her friends, and also seem deeply disturbed.

TFW you have to talk to someone's ghost daughter.

Grace's next appearance is in episode 6, "Old Spice," in which she—once again—helps her mother understand the Bible, this time in preparation for an interview Alicia will do about about her faith. There is a central irony to Grace's unwillingness (or perhaps, inability) to cross over into the spiritual realm: She is a deeply committed Christian. You would think, given any chance, she would ascend to Heaven. Like many of the best arcs on The Good Wife, Grace's ghostly presence leaves us with more questions than answers.

Grace: able to operate a laptop, unable to leave the earthly realm.

One clue as to why Grace is haunting her mother's apartment comes later in the episode, when her religious group gathers in what appears to be a seance to thank Grace for opening Alicia's heart to God. As the group sits in a circle, Grace looks unhappier and unhappier. Was her prayer group not just a prayer group? Did they also dabble in the occult? Are they the ones keeping her here, bound to the mortal plane?

No one likes being summoned.

By Episode 10, we start to get into even stranger waters. Alicia is called into Grace's school to deal with a prank gone wrong. Alicia clearly sees Grace at the school, though it's not entirely clear she's seen by others. It is here where we have to consider one alternate theory: Alicia is dealing with tremendous subconscious grief, both for Will and her deceased daughter. "Solving" a problem that Grace had at school (with characters we will never see again and who seem to sit in silent judgement of Alicia) may be, to put it bluntly, Alicia losing her shit. Actually, both could be true: Grace is dead and haunts the world as an ethereal being, and Alicia is not quite in her right mind. (Three episodes later, Alicia will semi-hallucinate finding Will alive again.)

Episode 13 finds us back in a more familiar groove: Alicia is mildly depressed by some very ethically dubious decisions, and Grace provides assurance that Alicia is doing the right thing."You're the best person I know," says Grace at one point, proving that Grace truly does not get out of the house very much. Is it Alicia and her grief that keeps Grace bound to this side of life?

We all have our own things. Alicia has her red wine; Grace has being incorporeal.

Episode 14 finds Eli Gold's (amazing) daughter Marissa, who has become Alicia's assistant during the campaign, talking directly to Grace, assuring her she doesn't want to "replace" her. This is clearly Marissa's way of saying she's content to let Grace's haunting be what it is, with no intervention on her part—while also saying she wants to remain alive and not stuck between our world and the land of the dead.

Episode 17 shows Grace utilizing one of her two essential skills as a ghost: using a laptop. (The other skill is being an enabler for her mother). She's the first to show Alicia that the law firm's emails have been hacked. But it's in Episode 19, after the emails about Alicia and Will's affair become public, that we start to see a change in Ghost Grace—she forces her mother to admit she lied, and forces her mother to say that lying is "OK." To see Grace truly disappointed in Alicia is heartbreaking, since it becomes clearer and clearer that Grace has remained a wraith in order to serve as a guardian angel to her mother—a women who may not be worth the sacrifice. It also shows Grace in her spectral form being more forceful than she's been all season.

Being a ghost isn't just all interpreting the Bible and using laptops. Sometimes it's hard, too.

Episode 20 is a brief return normalcy—or as normal as things can be when your ghost daughter watches "To Kill a Mockingbird" with you. It also serves as a prelude to Grace's final metamorphosis.

While Episode 21 sees Ghost Grace once again essentially being a cheerleader for Alicia's ideas (In this case, starting her own firm out of her apartment), there are two big developments:

1. Grace actually moves things around the apartment with Alicia. So far, the only real physical interaction we've seen her do is operate a laptop—easy enough for a ghost, which are known to spike electromagnetic field readers like crazy. But here we see Grace, despite being more a phantasm than a moving guy, help Alicia set up her home office.

2. Grace suggests that she could be Alicia's secretary. Alicia initially laughs at this—obviously ghosts can't be secretaries!—but then begins to consider it seriously. Even Alicia can tell something in Grace is changing.

When you need something moved / In your neighborhood / Who you gonna call / Ghost daughter!

In the season finale, Grace and Zach appear together for the first time all season, as Peter informs them of his plan to run for president. There is a brief moment when Zach glances at the spectral representation of his sister and a look of something passes between them. What transpired between them will probably always be a mystery. But, here, too, something within Grace is developing. She's more assertive, more confident of herself more in the conversation, questioning whether Peter and Alicia will have to continue to pretend to be married.

"Sorry about maybe possibly having something to do with your death, ghost sister."

And that's the final time we see Grace in season 6. By season 7, she's in the world again. She appears in court, interacts with a variety of people, lands clients for her mother's firm, even caucuses for her father in Iowa—far, far away from her mother's Chicago apartment.

So, somehow, Grace is back from the dead. How? Perhaps Alicia spent her free time practicing the Dark Arts and brought back her daughter back from the Other Side. But I think Grace—while making it clear she is not the Messiah—would probably point out that in both the Old Testament and New Testament, it's not just Jesus who gets resurrected, nor only Jesus who does the resurrecting. If there is a saint in the Florrick family, it's not Alicia.

In Luke 24:39, Jesus eats with his 11 remaining disciples after his resurrection. His disciples are amazed but also skeptical of what they are seeing, and Jesus gently chides them: "See my hands and my feet, that it is I myself. Touch me, and see. For a spirit does not have flesh and bones as you see that I have." It's easy, at the start of season 7, to think that Grace is still a wraith, haunting a very tasteful apartment. But within a few episodes she quickly proves herself for be "flesh and bones," walking among the living with confidence.

It took Jesus three days to come back from the dead and walk the earth again as living man; it took Grace Florrick one season of television.

This piece originally appeared on The Hairpin. Follow all their Good Wife finale coverage here.