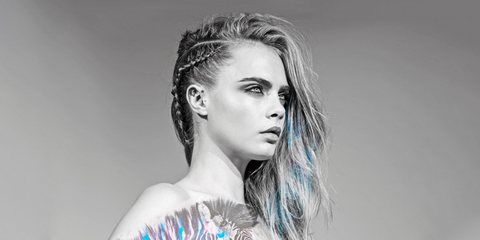 This just in: It is our honor to exclusively debut Cara Delevingne as the face of the first-ever international I'm Not a Trophy campaign, a global initiative to bring awareness to the malicious acts of trophy hunting and poaching of endangered species.

As you might now, these are issues close to Delevingne's heart in light of the killing of Cecil the Lion last summer. Following the tragedy, the supermodel even auctioned off her TAG Heur watch to raise money for wildcru.org.

As far as her how her involvement with I'm Not a Trophy campaign came about, it was all thanks to one of her supermodel pals who introduced her to the campaign's photographer Arno Elias.

"I was introduced to Arno's work after falling in love with the images he did for my friend and fellow model, Suki Waterhouse," she tells MarieClaire.com. "Suki put us in touch and before we knew it we were in Paris shooting together."

In the portraits shot by Arno, Delevingne is in the buff, covered in colorful, super imposed endangered species. But her contributions won't just be aesthetic.

"I plan on being very hands-on with the organization and will do whatever I can to help create awareness for the tragic poaching and trophy hunting that is occurring in Africa," she explained. "I'm extremely proud to act as inaugural ambassador for the first-ever, international I'm Not a Trophy campaign, a cause that not only benefits endangered species, but empowers women as well."

For more info on the campaign, head to www.imnotatrophy.org.

Arno Elias
This content is created and maintained by a third party, and imported onto this page to help users provide their email addresses. You may be able to find more information about this and similar content at piano.io
Advertisement - Continue Reading Below
More From Culture
Mother's Day Gifts to Show How Much You Miss Her
Get to Know Delessa From 'The Circle'
Advertisement - Continue Reading Below
Movies That Just Feel Like Summer
Different Pride Flags and What Each Represents
Get to Know Courtney From Season 2 of 'The Circle'
Why 'Fearless' Hits Different in 2021
'The Circle' USA Is Actually Filmed In the U.K.
Pre-Order These Highly-Anticipated 2021 Books
The 25 Most Underrated Films Ever Made
Were the Paintings in 'This Is a Robbery' Found?