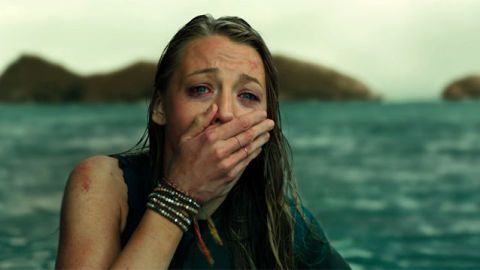 A man was stabbed nearly to death during a Wednesday screening of the Blake Lively shark movie, The Shallows. The Los Angeles Times reports that the attack was a random one, perpetrated by a total stranger.

Adam Lucero, 21, was watching The Shallows at the Roxy Theater in Santa Rosa, California on Wednesday afternoon. Delonte Anthony Hart, who was sitting behind him a few seats away, approached him, stabbed him multiple times in the back with a large butcher knife, and ran out of the theater. Police tracked down Hart, 23, a few minutes later and arrested him.

Fellow moviegoers helped Lucero before he was taken to the hospital, where he is being treated for life-threatening injuries. The knife hit his lung and nearly killed him, according to the New York Daily News. Lucero didn't know Hart, and the attack was apparently random. "It was completely out of nowhere. The victim did not do anything to provoke it, and the two men did not know each other," Santa Rosa Police Captain Rainer Navarro told the newspaper.

Some witnesses noticed that Hart was acting strangely during the movie, and some even moved away from his seat. Police did not say whether Hart, who is from Baltimore originally and is homeless, was under the influence of drugs or alcohol at the time of the attack.

According to the Santa Rosa Press-Democrat, this stabbing may be connected to the death of Cirak Tesfazgi, a homeless man who was stabbed 50 times early Monday morning in a doorway where he sometimes slept.

This content is created and maintained by a third party, and imported onto this page to help users provide their email addresses. You may be able to find more information about this and similar content at piano.io
Advertisement - Continue Reading Below
More From Culture
It's Been a Weird Year for 'The Bachelorette'
Political Books to Read Ahead of Election Day
Advertisement - Continue Reading Below
The Sexiest Movies on Amazon Prime
HBO Is Giving Fans 2 Special 'Euphoria' Episodes
What to Know About Tayshia's 'Bachelorette' Cast
Clare Crawley's 'Bachelorette' Cast Is Out
Dale Moss Is a Super Important 'Bachelorette' Star
Lessons From Frida Kahlo in Embracing My Culture
19 Documentaries on Netflix to Watch Right Now
What Happened to the 'Chicago 7' After the Trial?