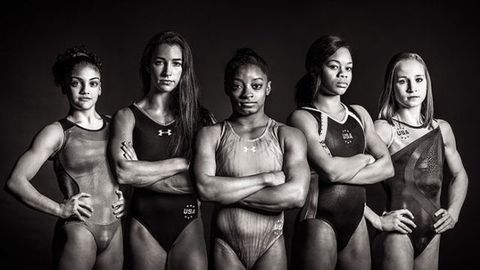 If you're desperately in need of some not-terrible news, the Olympics just delivered an exciting diversity win. The 2016's U.S. Women's Gymnastic Team was just announced after a seriously grueling Olympic trials, and it's made up of five rockstars—three of whom are women of color.

Simone Biles, Laurie Hernandez, Aly Raisman, Gabby Douglas, and Madison Kocian will compete next month in Rio de Janeiro, and are favored to win the gold medal thanks to an unstoppable mixture of awesomeness and flexibility. Get to know the girls below.

At just 16, Hernandez will be one of the youngest contenders in Rio. She's solid in all four events, making her a crucial member of this year's team—though she's still shocked by the fact that she made it. "Wow. That's all I can really say," Hernandez said of the news. "I was 12 and that's a really young age. Four years really matures you. I didn't realize how much mentally and physically older I got in the past four years, so looking back at this little girl watching the Olympics on her phone, I would never think I'd be here right now."

The 19-year-old Dallas native Madison Kocian slayed at uneven bars during the Olympic trials, but are we really surprised? She won the world title in 2015, and is considered an "event specialist." And yes, she's super pumped about making the cut: "It's just something so special that I will never forget, her announcing my name."

Gabby Douglas, 20, dominated at the 2012 London Games, getting a first-place all-around finish. It was history-making, y'all, and she also happens to be the first black gymnast to win an individual Olympic gold, which is just amazing. Douglas' trials weren't her best, but she's 100 percent in it to win it: "I feel like through my whole career I've had to fight for everything. I'm used to it by now but at the same time it's like, 'Let's do it and let's keep fighting.' That's me and my demeanor."

Thus far, 19-year-old Simone Biles has won 14 world championship medals. That's more than any U.S. athlete in history. In fact, Biles won the "all-around" at the Olympic trials, earning her the only automatic qualification spot. "I think we all thought we would be a little bit more nervous in the waiting room, but we were just talking and on our phones and taking pictures," she said of finding out the news. "Kind of having fun because you want to remember it as having fun instead of almost passing out."

Aly Raisman, 22, will return to the Olympics for a second time, after earning three medals in 2012 (she was Team USA's most decorated gymnast). She's known as "Grandma" on the team, a nickname that she's embraced: "We were joking and I was like, 'I really am going to live up to my grandma name because I'm going to have a heart attack before they announce the names,' because I was so nervous."

You probably knew this hashtag was coming, but #SquadGoals.

This content is created and maintained by a third party, and imported onto this page to help users provide their email addresses. You may be able to find more information about this and similar content at piano.io
Advertisement - Continue Reading Below
More From Culture
Meet the Cast of Netflix's 'Squid Game'
We're Getting a Season 4 of 'Manifest'
Advertisement - Continue Reading Below
Emma Mackey From 'Sex Education' is a Rising Star
The 'Sex Education' Season 3 Ending, Explained
Action Movies With Strong Women Front and Center
'The Great British Baking Show' Is Coming Back!
'Bachelor In Paradise' Spoilers: Your 2021 Guide
'Bachelor In Paradise' 2021: Everything We Know
Films With Plot Twists You'll Never See Coming
Mimi Keene Stole the Show in 'Sex Education' S3