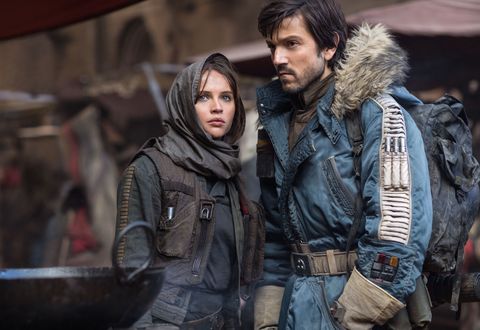 Rogue One: A Star Wars Story shocked absolutely no one by rocketing to the top of the box office this weekend. But Gizmodo reports that a group of conservatives, angered by the film's "political" messages against, well, racism and sexism, tried to stop its dominance with a #DumpStarWars campaign.

The controversy started after Star Wars' Twitter account tweeted, "Are you with her?" and posted a picture of Felicity Jones' character, Jyn Erso. The tweet was posted a few days before Election Day, so it's easy to make the connection to Hillary Clinton's campaign slogan "I'm with her."

Some conservatives also took issue with the team behind the movie and the political comments surrounding Star Wars. According to Wired, Rogue One writer Chris Weitz tweeted, "Please note that the Empire is a white supremacist (human) organization." Another writer, Gary Whitta, added, "Opposed by a multi-cultural group led by brave women."

Both of them deleted their tweets because of all the backlash. But Weitz, who openly supported Hillary Clinton, kept this tweet up instead, featuring the safety pin used after the U.K. "Brexit" vote to signal that you're an ally to marginalized groups:

This created outrage among the "alt-right," a white supremacist U.S. fringe movement that has been empowered by Donald Trump's election victory. They called both Rogue One and The Force Awakens "feminist propaganda." They even circulated the untrue rumor that the movie went through reshoots to include anti-Trump messages.

And even though Rogue One made $155 million in the U.S. and $290.5 million worldwide in its first weekend, people who boycotted it are still saying they won, because the movie made less than The Force Awakens did in its opening weekend. But $290 million is awfully tough to spin as a failure.

It would take a whole lot more people to effectively boycott a Star Wars movie, which at this point is guaranteed box office gold no matter what. But it's great to know that kickass women can save the day, even a long time ago, in a galaxy far, far away, and no "alt-right" movement (or stormtrooper) can stop them.

Advertisement - Continue Reading Below
More From Culture
We Could Be Getting More 'Tiger King'
HBO Is Making Iconic Shows & Movies Free to Watch
Advertisement - Continue Reading Below
Tim Gunn & Heidi Klum Also Wear PJs to WFH
'Parasite' Is (Finally!) Coming to Hulu
The Best Teen Movies of 2020
Family Movies Both Grown-Ups and Kids Will Love
The Best Wedding Movies of All Time
Read 'Anna K' Even If You Didn't Read the Original
19 Most Underrated Films of All Time
The Music Podcasts We Keep Pressing Play On