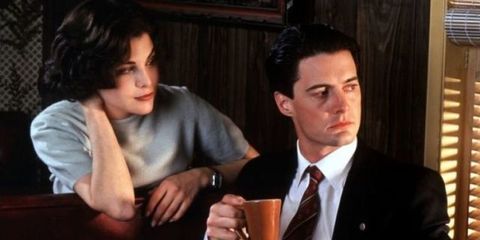 It is happening again. But really, it's actually happening again, and now we finally know when. Showtime's 18-episode revival of Twin Peaks will kick off on May 21, 2017, with a two-hour season premiere.

At the TCA Press Tour this afternoon, Showtime exec David Nevins described the show as "the pure heroin version of David Lynch," and promised that it will "reward close watching."

"It was the original social media show, the original discussion show, before any of the tools of fan engagement and social media really existed…That's one of the reasons why David [Lynch] is so particular about secrecy—it'll really reward close watching, making sure you're paying attention to detail."

In other words, here's hoping Reddit's servers are prepared for the onslaught of fan theorizing.

Further seasons of the show are unlikely, adds Nevins: "This is a limited series in the strictest sense—[it's] designed to be a closed-ended, one-time event." Asked about what would constitute success for the show, he said: "The fact that we are presenting David Lynch's pure version of Twin Peaks, with him having directed all of it—that is a success for us."

Rumors have been brewing for some time about a possible film festival premiere for the show—Lynch's 1992 Twin Peaks movie Fire Walk With Me premiered at Cannes—and the mid-May timing makes a Cannes premiere distinctly possible.