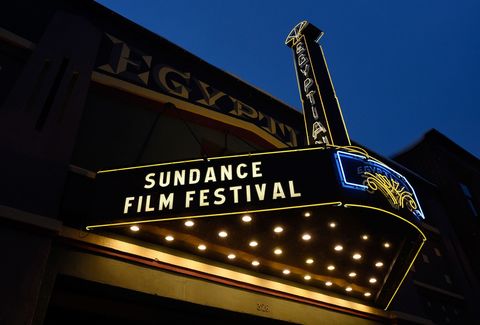 Since its founding in 1978, Sundance Film Festival has changed, expanded, and become a much different type of event—in true contrast from its humble beginnings. But 2017 was noticeably different, marking a new kind of festival altogether.

With the kickoff on the same weekend as the inauguration, this year's Sundance took a political, and often times earnest, turn. Director and writer speeches, once a time to talk about the conception and inspiration of the film, became messages of peace and activism. The films themselves echoed a culture of change and questioning and resistance (see: An Inconvenient Sequel). A Park City-based Women's March took place, led by Chelsea Handler and attended by more than 8,000 people. It was, truly, the dawn of a new Sundance. The personal is political. The personal is art. And the art is political. Here, a look at what went down on Main Street and beyond.

Things That Stayed the Same

While taking a turn towards the political, some things didn't change. Films played to audiences who, put simply, love movies. There were standouts and celebrity guests. There were drinks and flannel and snowboots and a whole lot of Canada Goose parkas (full disclosure: I was on a trip with the brand). Here, a look at some of the tried-and-true aspects of Sundance.

1. Canada Goose—the 2017 official outerwear sponsor—was out in full force not only on the ground in Park City, but on and off-camera. Fun fact: The brand has worked with the entertainment industry for more than 30 years and its products have been featured in over 200 films, outfitting both casts and crews. Known as the "(un)official jacket of film crews everywhere its cold," Canada Goose has been an official sponsor since 2013 and an unofficial uniform of many a person in Park City. For this year's film festival, CG created a limited-edition black HyBridge Perren Jacket, featuring the Sundance logo. Only 340 were created, to be worn by filmmakers and festival judges. Hailing from Northwest Indiana and attending school in Chicago, I know cold. And these passed my "my face is freezing but it's cool because I can still breathe out of my nose without dying" test. (And thank goodness—Park City saw the most snow it had seen in 15 years during the festival.)

2. Parties and booze are no strangers to Sundance. After-parties for films, private cast dinners, concerts, sponsored events, panels, or just the occasional hot toddy near a roaring fire—there was no shortage of fun (and drinks) to be had. Chase Sapphire had their lounge on Main Street, which hosted after parties for films such as The Big Sick and Beatriz at Dinner, while Kia Supper Suite hosted private cast dinners and cocktail parties for the likes of Columbus and Sidney Hall as guests drank Maestro Dobel Tequila. Canada Goose Base Camp treated guests to coffee and happy hours as talent stopped by for intimate chats. Stella once again hosted panels and parties in their Stella Artois Filmmaker Lounge, including a celebration of their "Buy a Lady a Drink" campaign. The event, "From Tap to Table: the Global Water Crisis through the Lens of Culture and Cuisine,"shed a spotlight on the global water crisis through a tasting curated by Chef Samuelsson and was hosted by Matt Damon. The Hub at Park City Live provided a nice getaway from the chaos during the day with Tanqueray gin (and green juices!), with performances by Major Lazer, Zedd, Tiesto, and more. The Applegate Reel Food Cafe popup featured delicious food—including a bacon bar—and drinks. (And created quite the stir when Jon Hamm and Kevin Bacon stopped by the bacon bar. Get it?) WGN celebrated the second season of their Underground series at Firewood, while celebs and night owls partied late into the night at the Tao pop-up.

3. The movie buzz was all too real. Sundance is known for putting forth movies that go on to win big awards (read: Oscars), and industry peeps mixed with film enthusiasts to watch all. the. films. Some standouts: An Inconvenient Sequel, the sequel to (you guessed it) Al Gore's An Inconvenient Truth, tackled climate change 10 years after the original premiered. It was, in a word, sobering. (#ClimateChangeIsReal.) Mudbound, about one white family and one black family in 1940s Mississippi, got two standing ovations. Roxanne Roxanne, a biopic about 80s rapping pioneer Roxanne Shanté, was one of the festival highlights hands-down. The film adaptation of play Marjorie Prime, starring Jon Hamm, stirred up a lot of conversation about memory and emotion. Landline, starring Jenny Slate, Edie Falco, Jay Duplass, and relative newcomer Abby Quinn—who gives an amazing performance, took us all back to 1995, before the time of tweeting and Instagram lives.

Things That Were Definitely New

1. Marie Claire had our own lounge as part of The Hub at Park City Live, where female celebrities—and Chrissy Teigen's other half John Legend—stopped by to don a "Be Heard" temporary tat and talk about the future of female empowerment. Chelsea Handler, Charlize Theron, Olivia Culpo, Theresa Palmer, Zoey Deutch, Jurnee Smollett-Bell, and more told us how they were going to make themselves heard in 2017—and it was enough to raise the alarm. Let's do this.

3. Whether anyone wanted to speak at length about it or not, politics were top of mind. And you felt it. From watching the inauguration (which coincided with the first weekend of the festival) to speeches by directors and writers introducing their films to audiences, to dinner conversations with friends and colleagues—the future of the U.S. and our president were hot topics of conversation. And while a film festival might not seem like the #1 place to talk of such things, in this current state, everything is a political conversation. Our bodies. Our art. Our lives. If I was a betting lady, I'd put money on more discussion—and more films reflecting our current state of politics—come 2018. See you then, Sundance.