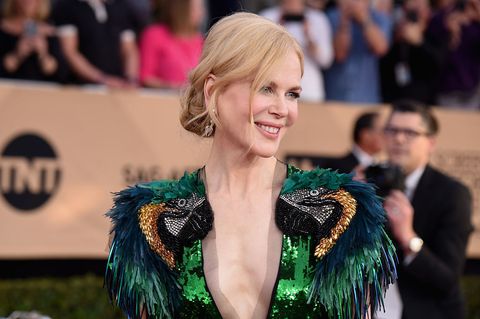 Nicole Kidman could play Jason Momoa's mother in his upcoming DC superhero movie Aquaman. Per The Hollywood Reporter, Kidman is in early talks for the role, which would put her in a cast alongside Momoa as the title character, Amber Heard as his love interest, and The Get Down star Yahya Abdul-Mateen II as a potential villain.

A little quick math on this: Kidman is 49, and Momoa is 37, meaning that her character would have to have given birth at the age of 12. Which is maybe fine, since we're talking about fictional superheroes with unusual genetics, but also...yet another reminder that Hollywood has some wacky attitude to women as they age.

Kidman's last foray into the superhero sphere was in 1995's Batman Forever, in which she played the love interest to Val Kilmer's Bruce Wayne. Though the movie was not great, it was still significantly better reviewed than DC's last two movie efforts Batman v Superman and Suicide Squad. Here's hoping Aquaman can buck the trend.