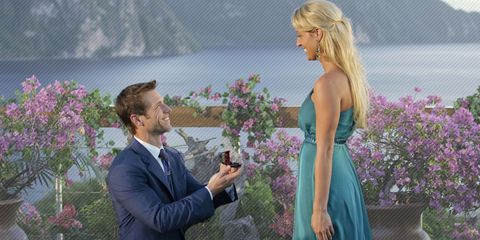 Neil Lane is an Aquarius, so he's more likely to remember your energy than your name, but thanks to the Bachelor, *he's* become a familiar face and brand to millions. In advance of the finale, we caught the jeweler—coming off another spectacular Oscars—to talk about why he could really use a post-awards-season holiday, being in the background of history, and what sort of engagement ring we might expect to see on March 13.

On the madness of red-carpet prep: "It's never what you expect. It's never simple. Their stylist comes in, sometimes the celebs come in. We get the email, we work with our staff, the jewels go out for a fitting, they come back. That dress doesn't work, we do another set of jewels. And that's just one–we have 25 stylists! So start multiplying that, and the week is just complicated–crazy! There are guards taking jewels, you know, so many things happening! And at the last minute, dresses change! Even on Saturday night, they change! The most hectic thing of all is writing the jewels up, writing the paperwork and the insurance, that kind of stuff."

On being part of a historical moment: "When Viola Davis won her first Emmy–she was the first black woman to win the Emmy [for Best Actress in a Drama]—with the jewels, it was really nice to work with her. And when I see her, it's such a nice camaraderie. Yes, it's the background, but it's a wonderful background to be in. It's like when you look at a picture, you're part of the picture. It's a wonderful position for me to be in and be a part of something inclusive and glamorous and something that people love to watch. I mean, who doesn't love watching a girl walking down a red carpet with the paparazzi. It's exciting! And even if you want to be blasé about it, it's hard to be blasé about it!"

On non-knowledge of jewelry being the great equalizer for Bachelors and regular men alike: "They're dealing with a very special moment in their lives, and I get the best of that. I get the most genuine guy in the world, and here they are choosing the ring for their beloved. Those experiences are some of the best that I have with people. Because it's the most honest time. They're asking a lot of questions. They want to know what the stones mean. They want to know the history of the emerald cut and what that means, or the cushion cut, which is a very romantic cut from the 19th century. So they're very inquisitive, and they're really nervous!"

On working with one of favorite Bachelors (but he really did like all of them): "With Sean Lowe, it was a very memorable experience. I think we filmed in Thailand. He had a wonderful, sincere personality. His enthusiasm and curiosity with the ring–very important. And Catherine now has a baby, and that relationship really blossomed. He was special, and she was special."

On really liking all of them, even Juan Pablo: "People don't like Juan Pablo, but he was genuine with me! People have to understand that when I'm dealing with them, I'm not seeing the multiple personalities that are happening when they're filming. What I'm dealing with on The Bachelor, it's a very, very special time in their lives. I get the best of them for that moment I'm with them."

On what Nick Viall's ring will be like: "The one word to describe the ring for the finale—I have to say, the ring is beautiful. I try to do something different for each finale for each guy. I'm always trying to be inventive. So hopefully, it worked for me this time!"

Chelsea Peng I'm Chelsea Peng, the assistant editor at MarieClaire.com.
This content is created and maintained by a third party, and imported onto this page to help users provide their email addresses. You may be able to find more information about this and similar content at piano.io
Advertisement - Continue Reading Below
More From Culture
Avengers Fans, Assemble: 'WandaVision' Is Here
Where Is Night Stalker Detective Gil Carrillo Now?
Advertisement - Continue Reading Below
What We Know About Part 2 of 'Lupin'
A Look Back at Princess Anne's Life in Photos
Where Is the Cast of 'Gilmore Girls' Now?
The Most Hotly Anticipated TV Shows of 2021
This TikToker Turned 'Bridgerton' Into a Musical
There's a New Netflix Doc About the Night Stalker
Where Is Richard Ramirez's Wife, Doreen Lioy, Now?
Mainstream Movies With * A LOT * of Nudity