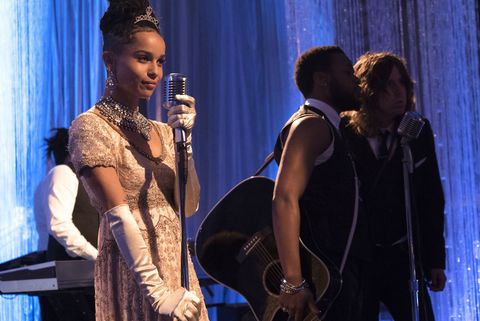 Season two of Big Little Lies is looking more and more likely. After the finale aired, producer and star Reese Witherspoon confirmed that a second season was being discussed with Liane Moriarty, the author of the original 2014 novel. Now Moriarty has shared more details on her plans for the future.

"I have started to think about ways this could continue," Moriarty told The Sydney Morning Herald. "The producers have asked me to see if I can come up with some ideas. I wouldn't write a new book but perhaps a new story and then we'll see what happens…there's definitely places you can go."

For starters, Moriarty would want to bring in "more of Bonnie's story from the book." After Bonnie (Zoe Kravitz) pushes Perry (Alexander Skarsgard) to his death, the book goes on to reveal that she had an abusive father, and was triggered by seeing Perry's violence towards his wife Celeste (Nicole Kidman), none of which is mentioned in the show. Moriarty was initially disappointed that Bonnie's backstory had been left out, but notes that the show's more unresolved ending "leaves open the possibility of season two."

Celeste's grieving process in the wake of Perry's death would also be a focal point. "When you've been through a relationship like that, how do you feel now? How would she feel? She's grieving. She's still grieving for the end of a terrible relationship and I think that would be a really interesting thing to explore."

Given how beautifully Big Little Lies ended, we were on the fence about the possibility of more—but dammit, this is all sounding pretty intriguing.

Emma Dibdin Contributor Emma Dibdin writes about television, movies, and podcasts, with coverage including opinion essays, news posts, episodic reviews and in-depth interviews with creatives.
This content is created and maintained by a third party, and imported onto this page to help users provide their email addresses. You may be able to find more information about this and similar content at piano.io
Advertisement - Continue Reading Below
More From Culture
28 Movies With Super-Romantic Sex Scenes
Was Princess Di in Love With Her Bodyguard?
Advertisement - Continue Reading Below
40 Things You Probably Didn't Know About 'Glee'
The 13 Steamiest Jane Austen Adaptations Ever
Astrology Gifts for Your Horoscope-Obsessed Friend
'The Queen's Gambit' Ending, Explained
The Witches of 'The Craft': Where Are They Now?
'Friends' Fans Need This Epic Advent Calendar
A Gift Guide for the Film Buff in Your Life
Where Are All the Modern-Day Lesbian Films?