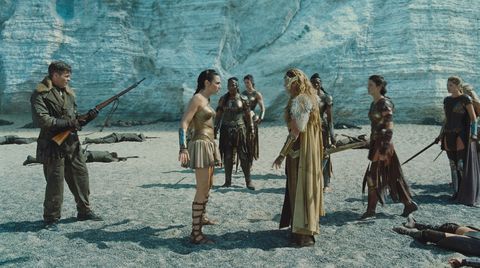 Okay, first thing's first: If you haven't already seen Wonder Woman please get yourself to a movie theater immediately and rectify the situation. Because once there, you'll meet the most kick-ass group of women cinema has ever encountered, otherwise known as the Amazons of Themyscira.

look at these amazing pics of the amazons on set of #WonderWoman OMG pic.twitter.com/02csVQslHL

The Amazons' fight scenes are arguably some of the best moments in Wonder Woman in terms of choreography, directing, and sheer awesomeness—and it's thrilling to know that director Patty Jenkins cast them from a pool of pro-athletes. In other words, she picked real-life superheroes—including American Crossfit champion Brooke Ence and Swedish professional fighter Madeleine Vall Beijner.

The group trained for weeks in London, and actually had to learn to be *less* badass. "I've been training for 12 years not to show anything, even how hard I get hit," Beijner tells Entertainment Weekly. "They called me RoboCop because when we were training, they were like, 'You're supposed to show that it hurts!' And I was like, 'No, I don't get hurt! I'm a fighter!'"

"It really is cool to see this whole training area, and there's not one male figure in sight," Ence says. "It's just women wrestling other women, kickboxing, doing pull-ups and practicing with spears—just a lot of stuff that in the real world is very male-dominated."

These women are strong, beautiful, and better than your faves. Much like Wonder Woman itself. 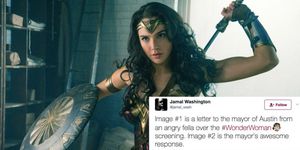