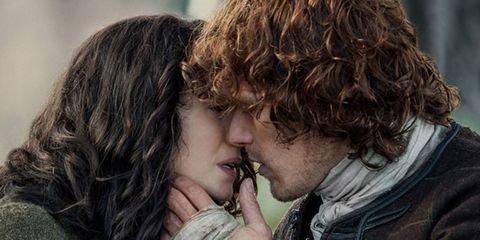 Mild spoilers for Season 3 of Outlander below. Proceed with caution!

Anticipation for Season 3 of Outlander is huge, and the 4000 strong audience at the show'spanel at Friday's San Diego Comic-Con got given the greatest surprise. Following the cast's Q & A session, everyone in attendance got to see an advance screening of the first episode of Season 3, which I think we can all agree is the best surprise ever.

According to Entertainment Weekly, the panel's host, Jenna Dewan Tatum, revealed that something special was planned, which is why she wrapped up her interviews after just 30 minutes. While the rest of the world continues to wait not-so-patiently to find out what happens next in the Starz series, Outlander fans at Comic-Con have already seen the first instalment.

The episode apparently begins with a major war scene at the Battle of Culloden, and an all-important fight between Jamie (Sam Heughan) and Black Jack Randall (Tobias Menzies). As Entertainment Weekly reports, Menzies suggests that the showdown "is surprising, actually. Maybe it's not entirely what people expect."

The episode is also set in twentieth century Boston. According to Variety, we see Claire returning to her marriage to Frank, to have Jamie's child, and we witness continuing unrest between the pair. Frank is uncertain that Claire can get over her attachment to Jamie, and the couple argue throughout the episode.

Omg just watched the #outlander #SDDC2017 panel & they got a screening of the 1st ep of season 3!!! Soo jealous...September is too far away!

At the panel, Heughan also teased that Jamie and Claire wouldn't have as much screen time together in Season 3. He said, "We were apart for a lot of this season. The characters have their own lives."

....and this happened! Saw first episode of season 3! #outlander pic.twitter.com/I4YusL6As0

While the rest of us will have to wait until September 10, 2017 to see the first episode of Season 3, it's exciting to hear some small revelations about the new episodes. And hopefully, Claire and Jamie will be reunited again onscreen, before too long.

Amy Mackelden Weekend Editor Amy Mackelden is the Weekend Editor at HarpersBAZAAR.com, where she writes about entertainment, celebrity news, beauty, and fashion.
Advertisement - Continue Reading Below
More From Culture
'Good Girls' Is Back for an Explosive Season 3
Netflix's 'Haunting of Hill House' Will Return
Advertisement - Continue Reading Below
Criminal Minds Season 15 Will Be Its Last
The Hot New Podcasts to Add to Your Queue
Who Are the Women of 'The Bachelor' in 2020?
Join Marie Claire's Virtual Monthly Book Club