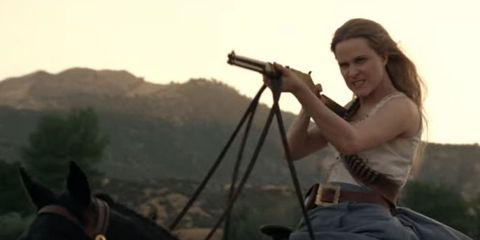 This weekend, HBO debuted a brand new trailer for Westworld Season 2 at San Diego Comic-Con. The new footage came as a big surprise to fans, considering the show isn't set to return until 2018.

The new trailer, eerily set to "I Gotta Be Me" by Sammy Davis Jr., doesn't give away a ton of specifics about the plot for the upcoming season, but the moments it does show are all nothing short of incredible. Here are some of the most eyebrow-raising moments:

Bernard standing over a dead tiger:

Maeve, holding a gun and standing in a room of dead bodies of her own:

Dolores, gunning down people (humans?) in a field:

With Bernard in the backseat:

And finally, the Man in Black (AKA William), looking very much alive and up to his old tricks:

Watch the full trailer below:

Kayleigh Roberts Kayleigh Roberts is the weekend editor at Marie Claire, covering celebrity and entertainment news, from actual royals like Kate Middleton and Meghan Markle to Hollywood royalty, like Katie Holmes and Chrissy Teigen.
Advertisement - Continue Reading Below
More From Culture
You Can Get a ‘Golden Girls’ Birthday Party Kit
Meet the Star of 'The Bachelor's ChampagneGate
Advertisement - Continue Reading Below
Hannah Ann Sluss From 'Bachelor' Was a Model
Who Is 'Bachelor' Peter's Mom Talking About?
Who Is Hannah Ann Sluss From 'The Bachelor'?
Who Is 'Bachelor' Contestant Victoria Fuller?
Who Is 'Bachelor' Contestant Madison Prewett?
Who Are the Women of 'The Bachelor' in 2020?
14 Unsung Black History Heroes
The Best Romantic Movies for Every Vibe