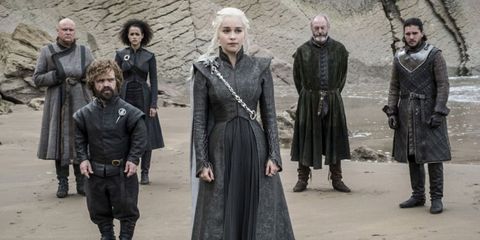 Game of Thrones Season 7, episode 4, "The Spoils of War," may have leaked online, but those of us who have resisted the temptation to watch are still obsessing over fan theories about the episode. Here are this week's fan theories, ranked from least to most likely to come true.

Ser Jorah will return and Dany will fulfill a prophecy.

After much speculation about whether Jon Snow or Daenerys Targaryen (or both) is the Prince (/Princess—thanks, Missandei) That Was Promised, a fan theory that points to Dany as the Promised One has gained traction this week. The theory digs deep, pointing to a passage from the books that explains how Azor Ahai's sword, Lightbringer, was forged.

I think [the third episode] basically confirmed who Azor Ahai is and it has everything to do with the forging of Lightbringer. In the books, the legend states that Azor Ahai was working to forge a hero's sword. On his first attempt, he tried to temper the steel in water, but it shattered. On his second attempt, he tried to temper the steel by thrusting the sword into the heart of a lion, but it too shattered. On the third and final attempt, he thrust the sword into his wife's heart, and became successful in creating his sword Lightbringer. Let's look at the two battles that involved Daenerys' armies in each episode the past two weeks. The first, Yara/Dorne vs. Euron naval battle. Euron crushed their forces, taking their ships as well as Yara, Ellaria and Tyene as prisoners. This attempt was a failure for Daenerys. The second, Unsullied vs. Casterly Rock. While Daenerys comes out with a victory in the battle itself, Cersei outsmarts her here. Only a fraction of the Lannister army is defeated, and Euron burned her fleet. The Unsullied have to march across Westeros to return to Dragonstone, where Lannister forces will most likely be waiting for them. Another failure for Daenerys. The location of Daenerys' failures is the key here. The first, in water. The second, Casterly Rock, the seat of House Lannister, whose sigil is a lion. And if we're thinking figuratively you could say Casterly Rock is the heart of the lion. If these battles represent any sort of pattern, it is pointing to the fact that Daenerys Targaryen is Azor Ahai. We don't know yet who will be standing in for the third part of the prophecy, Azor Ahai's lover, but I'd be willing to guess that it is Jorah Mormont. He's been cured of greyscale and is heading back to Daenerys. It seems logical. The only thing I'm still unsure of is what or who exactly Lightbringer will be for Daenerys. It seems to be some sort of army, maybe involving dragons, but who knows.

Since we know Ser Jorah is recently cured of greyscale and on his way back to Dany's side, this isn't a bad theory. It might be a little early for their reunion and the show seems to love Jon Snow, so ruling out the possibility that both he and Dany are Promised is a leap, but it's an excellent theory, nonetheless.

Daenerys will discover the truth about Jon Snow.

Sooner or later, Dany and Jon have to learn that they're related. One fan theory has Dany and Jon learning the truth while mining the dragonglass under Dragonstone. The theory in question traces back to a prophecy from Season 2, and it's not a bad one, but my money is on Awkward Bran to break the news.

Last week's episode ended with Olenna Tyrell confessing to Jaime Lannister that she was behind the plot to kill his and Cersei's son, Joffrey. She also asked him to pass that tidbit on to Cersei. This revelation isn't just closure for the Lannister Twins (even though the audience has known Olenna was involved in the plot for a while now, this is news to them), it's also something with the potential to drive a (bigger) wedge between them.

Cersei blamed Tyrion for the assassination, an accusation that set off a chain of events that led to Tyrion's exile, and the deaths of Jaime and Cersei's father, Tywin, and daughter, Myrcella (and, if you keep going, to the death of Tommen and Cersei's decision to empower the Sparrow and later destroy the Sept). Jaime might (very rightly) have some negative feelings about that.

Daenerys will be a dragon.

Before her death, Olenna Tyrell advised Daenerys to "be a dragon" and use her fire and her force to take King's Landing and, with it, the Iron Throne and rule of Westeros. Dany has been playing it safe and following Tyrion's advice so far, but after last week's disappointing siege of Casterly Rock, Dany might be done following her Hand's strategy for a while.

Arya will return to Winterfell.

This one isn't so much a theory as a guarantee. What's really interesting about Arya's return to the North is what she'll do when she gets there. There's a running fan theory that she will be the only person who can protect Sansa (since Sansa said "no one" could protect her and, well, a girl was no one).

Hopefully Bran won't be too awkward when he sees Arya again for the first time ("Hey, so you looked really pretty the day you went blind").

This content is created and maintained by a third party, and imported onto this page to help users provide their email addresses. You may be able to find more information about this and similar content at piano.io
Advertisement - Continue Reading Below
More From Culture
Tia Mowry Has a Gorgeous Bookshelf in Her Bedroom
Listen to These New Sad Songs for a Good Cry
Advertisement - Continue Reading Below
Will There Be a Season Two of 'Ginny & Georgia'?
Breaking Down the Ending of 'Ginny & Georgia'
'The Real World' Cast Members: Then and Now
Figuring Out Who Wins 'The Bachelor'
The Best Easter Egg in 'Behind Her Eyes'
The Best Memes of 2021 (So Far)
The Best Psychological Thrillers of All Time
The Top-Grossing Book-to-Movie Adaptations