Many Game of Thrones enthusiasts were disappointed that the long-held fan theory known as Cleganebowl didn't come to fruition during the Season 7 finale, which saw brothers Sandor Clegane (AKA The Hound) and Gregor Clegane (AKA The Mountain) confronting each other during their Dragonpit hang session.

The theory states that the brothers (who have a long history of hating each other) will engage in an epic show-down—and it looks like fans will get what they want in Season 8. In fact, The Hound actor Rory McCann has already started training. "If it happens, fantastic," he said in a recent interview. "Listen, I've started training already."

Meanwhile, Mountain actor Hafþór Júlíus Björnsson says the fight is more than likely to happen before the series ends, teasing: "It looks like it's going to go that way."

Cleganebowl will almost certainly be a fight to the death, so chose sides wisely and get ready to bid adieu to your faves. 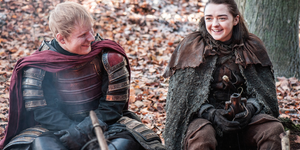