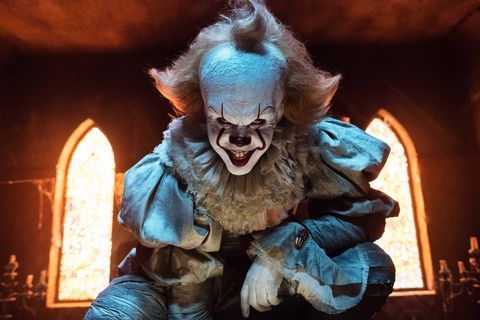 The Stephen King adaptation It just became the highest-grossing horror movie of all time. And that's partly thanks to Bill Skarsgård's terrifying portrayal of creepy clown Pennywise. If you're one of the many people who have seen the movie and now have nightmares about said clown, there's a Twitter account out there that will either make it better—or make it way worse.

@Pennywise_Dance, created by a video-gaming YouTuber who goes by Speedy, pairs Pennywise's menacing dancing with pop songs from artists like Taylor Swift and Outkast. It removes the sense of dread you get from watching Pennywise do his thing, but also makes otherwise harmless pop songs sound oddly sinister.

Take a look at some highlights:

Here's Taylor Swift's "Shake It Off:"

"Mambo No. 5" by Lou Bega, as a response to Stephen King's older tweet:

And of course, "Can You Feel the Love Tonight" from The Lion King.

Can you feel the love tonight? ... pic.twitter.com/aInfOQE1Kt

Sorry about all your future nightmares.

The Sexiest TV Scenes of All Time
How 'Bachelor' Peter Got That Scar on His Face
Who Is 'Bachelor' Contestant Victoria Fuller?
Who Is Hannah Ann Sluss From 'The Bachelor'?
Read 'Followers' With Us in February