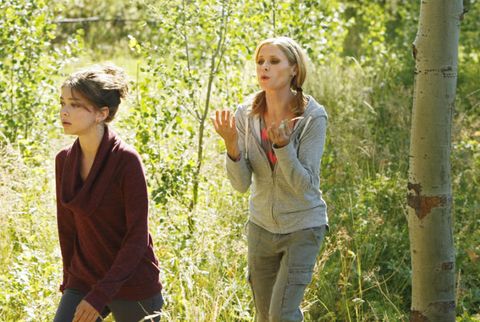 MARIE CLAIRE: Why did you write this book? France is famous for fashion and cheese, not child rearing.

PAMELA DRUCKERMAN: True. But after having a baby in France, I noticed that French kids sleep through the night by 2 months old, play quietly while their mothers chat, and don't throw tantrums. Family life in France is generally much calmer than in America. As a journalist, I was curious to know why. As a mother, I was desperate to know!

MC: What are French moms doing that American moms aren't?

PD: One critical difference is how we cope with guilt. American moms really embrace guilt. It's a kind of emotional tax we pay for going to work or plopping our kids in front of the TV so we can have time to ourselves. French mothers consider guilt unhealthy. They also believe it's dangerous for mothers and children to spend all their time together, that even babies and toddlers need to cultivate their inner lives without a mother's constant interference--and that a household that's centered entirely on children is wildly out of balance.

PD: They're extremely strict about a few key things, especially saying bonjour and au revoir to adults, as a sign of respect. But they're quite permissive about the rest. They give kids a lot more autonomy than I'm used to. Six-year-olds go on weeklong school trips and spend two-week holidays alone with their grandparents. French preschoolers are even entrusted with their own curse word: caca boudin. It translates to "poop sausage." The first time my daughter said this, I wasn't sure whether to be angry or amused.

MC: Do French mothers look different? Do they seem happier?

MC: You tried to apply French parenting methods to your own kids. Did it work? Are you a "French" mother?

PD: When I'm with my kids in public, I usually think that they're badly behaved compared with the French kids I know, and pretty good compared with the Americans. They don't always say bonjour and au revoir, but they know that they're supposed to. They demand Camembert at the end of a meal. I usually speak only English to them, but in moments of crisis, I declare, "C'est moi qui décide"--"It's me who decides"-- which is what French parents say to establish their authority. I'm always a bit surprised when they actually believe me. My skinny jeans, unfortunately, are still on the shelf.

Advertisement - Continue Reading Below
More From Culture
The Best Korean Dramas of All Time
Mainstream Movies With * A LOT * of Nudity
Advertisement - Continue Reading Below
Things Between Victoria F. and Chase Rice Got Ugly
Who Are the Women of 'The Bachelor' in 2020?
Rosalía Is The One To Watch At This Years Grammys
Sydney From the 'Bachelor' Knows Hannah Brown
The 10 Hottest Movies on Hulu Right Now
'The Bachelor' Has Already Finished His Season
When Michelle Carter Is Expected to Walk Free
How Much Time Did Michelle Carter Get in Prison?