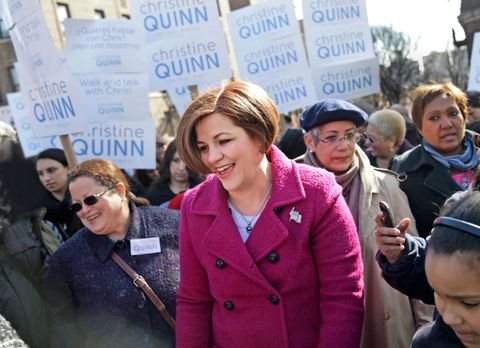 While it's standard practice for political candidates to release books that tout their ideological and community-based bona fides, New York City Council Speaker and mayoral hopeful Christine Quinn, 46, has written a memoir that covers some very personal ground, including painful memories of losing her mother to breast cancer as a teen, subsequent recoveries from disordered eating and binge drinking, and her coming out to her loving but skeptical father.With Patience and Fortitude (William Morrow) is a self-portrait that complicates Quinn's image as a tough-talking New York dame.

MARIE CLAIRE: How does your potential "firstness" influence your campaign strategy?
CHRISTINE QUINN: I'm me! I'm Irish and I'm a woman and a lesbian. That's just who I am. If you spend too much time thinking about how your gender or sexual orientation affects you, it takes up an important part of your brain, as opposed to just going out there and doing what you love to do.

MC: Your identity might affect the way you're received. For example, The New York Times recently ran a piece about your hot temper, a quality that might not have been remarked upon were you male.
CQ: Look, I am a very pushy broad, and I say that with great pride. My late mother was abundantly clear: My sisters and I were to figure out what we were to do with our lives and we were to do it exceptionally well. The most significant thing about my outlook has been the effect of my mother dying when I was a teenager. I don't believe that you have an open-ended amount of time, so I push really hard.

MC: When the Times ran the story about your anger, I wondered: Is impoliteness a prerequisite for the job of mayor of New York?
CQ: I'm polite! Being pushy and being impolite are two different things. I always say "thank you"; I always say "please."

MC: Your memoir is revealing about your sexual awakening, your struggle with bulimia, a stint in rehab. Why expose so many vulnerabilities going into a political race?
CQ: If a young woman can read this book and see that a challenging childhood can lead to an amazing life beyond her wildest dreams—that's what the story of my life is. I'd also like to share the message with girls and young women that they need to let go of the goal of perfection.

MC: When you met your wife, attorney Kim Catullo, she had no interest in going out with a politician because she's so private. How does she feel about this campaign?
CQ: Yes, Kim told the friend who set us up on a blind date that she would never go out with a politician. Now she worries sometimes—that the things I push to
do will be difficult. But Kim is a thousand percent immovably supportive of me.

MC: Your dad transformed from someone who didn't want to acknowledge your homosexuality to someone who marches in the Pride parade. Did his evolution on gay rights mirror the nation's?
CQ: My father's evolution is something he deserves an amazing amount of credit for. It also speaks to the power of people sharing who they are with the people they know and love, and how that has created an enormous change.

MC: You write that as a kid, "biographies of people who changed the world were everything to me." Do you feel like your becoming mayor of New York could make an impact on the world?
CQ: Where New York leads, the country follows. Second to the president of the United States, the bully pulpit of the mayor of the city of New York is the biggest and strongest. So what we do right around affordable housing, reducing unemployment, reducing homelessness—those are going to be successes that I hope will resonate through every city in America.
This content is created and maintained by a third party, and imported onto this page to help users provide their email addresses. You may be able to find more information about this and similar content at piano.io
Advertisement - Continue Reading Below
More From Culture
The 25 Most Underrated Films Ever Made
Were the Paintings From 'This is a Robbery' Found?
Advertisement - Continue Reading Below
'Bridgerton' Season 2: Everything We Know
New True Crime Books You'll Obsess Over
The 'Who Killed Sara?' Cast: Your Complete Guide
The 'Paradise City' Cast Plays Trivia
Sad Movies for When You Need a Good Cry
What Happens When Prince Philip Dies?
Photos of Prince Philip with His Grandchildren
The Queen and Prince Philip's Marriage Timeline