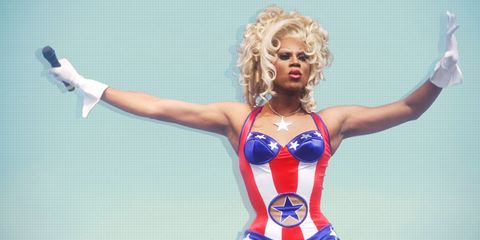 In promotions for Season 9 of the addictive reality show RuPaul's Drag Race, host and drag queen icon RuPaul proclaims that we need drag now more than ever. And how. In an administration that is already taking away rights from the LGBT community (to name just one of many discriminated against marginalized groups), it's easy to feel hopeless and let down about the future of our country.

But according to RuPaul, that's where drag comes in to save us all. The art form of drag teaches us that gender—and other petty things that divide us—is not to be taken too seriously. And as Drag Race returns for its ninth season on March 24 (this time on VH1), it's about time we get the relief we need. Here, RuPaul explains just how drag can help fight President Trump.

"I'm masculine, I'm feminine. Everybody is. It's all about a balance."

If more people understood drag, Trump would never have been elected.

"Drag really exists to remind humans that life is not to be taken too seriously. The façades that we all put up are meant to be poked at. Drag is there to say,'Yeah, I'm a man, and I'm laying the cards out on the table. I'm there to show you that this whole world is an illusion, so if you're smart, you'll look beyond the illusion.' That's the creed of drag right there. Look beyond the illusion. That's why it's more important now, because people seem to have amnesia and forgotten what a f*cking used car salesman looks like."

Drag queens break down the ego that Trump has become famous for.

"We live in an egocentric culture, and Trump is the poster boy of that egocentric culture. Drag is the antithesis of ego, because it says, 'I'm a shape shifter. I make no bones about it. What I'm presenting is completely, 100 percent fabricated.' The ego on the other hand says, 'No, I am what I say I am, and I'm 100 percent authentic.' That's the first clue that you need to look for when you're dealing with a used car salesman."

When far-right troll Milo Yiannopolous (who is openly gay) insulted 'Drag Race' judge Ross Mathews recently, Mathews responded with class, saying, "I am proud to be the antithesis of whatever that guy is." It was a perfect answer that we can learn from.

"Ross' response was so perfect. It is coming from a place of love. The ego cannot deal with that. That is the greatest ammunition against the ego. It cannot deal with authenticity or love or true feelings. It's laying it on the table and saying, 'This is fake. Want to know the real me? Get inside my heart.' And that's why Drag Race has been such an important show throughout these years. Because through the course of it, you get to see the strength, and the true grit, and the tenacity of the human spirit in the kids who come on our show. And you fall in love with it. That vulnerability is where we have to go next. We think we're separate from one another. This whole election was all about separating people. And that's what the ego wants to do."

Drag is the future because it's all about balance.

"I'm masculine, I'm feminine. Everybody is. It's all about a balance. This world is about a balance. Night and day. Imagine someone who doesn't acknowledge the nighttime. That doesn't really make any sense. That's why it's so important for everyone to evolve. I think the people who voted for Trump are the people who are not willing to move forward into this evolutionary period of our lives on this planet. They want to go back to the way it was. We don't go back. We are in the now and we are obviously moving forward. But we don't go back."

"How dare some man tell a woman what to do with her body. That is outrageous! Outrageous."

RuPaul's mother got her first post-divorce job at a Planned Parenthood. He's now helping raise money for the organization, which is under attack from (mostly male) lawmakers on the right.

"Women in our culture have been so marginalized and so really beaten down. We live in a masculine-dominated culture. How dare some man tell a woman what to do with her body. That is outrageous! Outrageous. As a human, that is a big issue for me that really strikes a chord. My mother, she had never really had a job before. Planned Parenthood represented so much freedom for us. For me to watch her blossom into a working woman and self-sufficient after this sort of system of being married to a man and staying home, after that façade fell apart, she built herself back up. In my heart, it represents so much strength, and I think it's a very important organization."

Once you've watched 'Drag Race' for your self-care, embrace nature.

"I meditate. I pray. I'm not religious, but I do pray. I stretch, I do yoga. That's where I find that balance. I have to find that balance in silence, and in nature, and in love. You needn't look further than going out in nature and seeing a tree that is firmly planted in the earth and unmoved. There's a serenity and an elegance and a majestic energy surrounding it. And that's a great lesson for each of us."

John Oliver endorsed him for president in 2020, but he's not taking the bait.

"If you've ever seen what the political process is, it is the most boring, horrible thing. And, it's a job of only campaigning for campaign funds but it's about compromising your own personal integrity. And listen, I do enough of that in Hollywood."

When a contestant on 'Drag Race' claims they've studied enough to win the crown, they're usually wrong.

"Because the truth of the matter is, the more relaxed and the more vulnerable you are, the better chance you have at moving forward. Because you lead with your heart, and that's true not just on our show, but in this world. People are trying to outsmart the other. Anyway, my point is, lead with your heart and you will go very far. Don't be afraid. It's about the vulnerability. Surrender is very powerful. I know it's counterintuitive, but that is the truth."