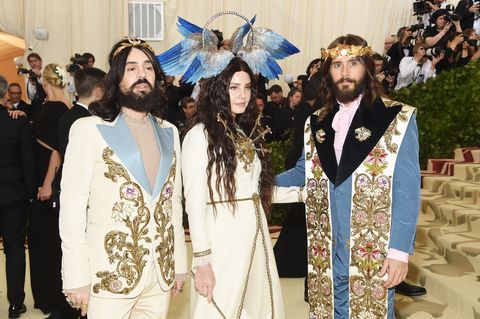 He walked the red carpet with Gucci creative director Alessandro Michele and singer Lana Del Rey, who wore a very elaborate Gucci number, which included a halo made of birds, heart pendant of swords, and opera glasses with eyes in them.

As one Twitter user pointed out, the eyes are a nod to Saint Lucy, who, according to one legend gouged her own eyes out to discourage a potential suitor who admired them.

lana knows her iconography and i also would pluck out my eyes like st lucy if i had to stand next to jared leto at an event pic.twitter.com/wSsLE3aInt

The three are on point for the Heavenly Bodies theme:

Moments before the #MetGala, Gucci Creative Director #AlessandroMichele together with @lanadelrey and @jaredleto in custom #Gucci. #MetHeavenlyBodies

Twitter gave Leto and the gang major props for fully embracing the spirit of the event.

Jared Leto been WAITIN for his moment to be white Jesus. Poised and ready. https://t.co/FAkTp5Ihiq