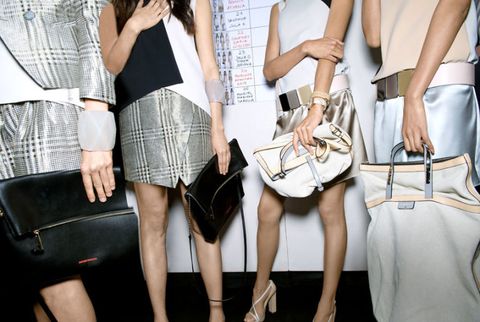 Jason Lloyd-Evans
Fact: To wear a Giorgio Armani suit is to broadcast to the world, "I've made it." But now, more than ever, what a woman wears on her feet or carries in hand says more about her degree of success than the tag in her blazer. Here, MC Creative Director Nina Garcia discusses the art of accessorizing with the patron saint of power dressing.
Nina Garcia: I'm a big believer that accessories can make or break a look. What are some of the biggest mistakes women make in terms of their shoes and bags?

Giorgio Armani: Proportions—it's easy to get them wrong by getting carried away with current trends. There is such a thing as a bag being too big or too small regardless of its shape, and the effect [in relation to your outfit] can at times be ridiculous. The same thing applies to shoes. Extremely high heels are mostly advised for tall women. Also, it's not a good idea to match your shoes with a bag too stringently. Go for subtle similarity.

NG : We require so much from our accessories now. Between the office, cocktails, and running errands, they can take a beating! What's the secret to buying a piece that lasts?
GA: It would be great if there were a formula that could be applied, but given the long-term success of certain iconic bags, there is some reasoning to be done. It must be distinguishable to the eye for its unique workmanship rather than brand visibility. As far as color, it should be in style.

NG: If you were to pare down a woman's arsenal of accessories to just a few shoes and bags, what would the must-haves be?

GA: A sporty citywear style, like moccasins or men's lace-ups and a shoulder bag. For the evening, a little more pizzazz with heels and a black clutch with golden or crystal accents. For the summer, light-weight sandals and a colorful shopper bag. In theory, each would satisfy every need.

NG: Do you find that there's a big difference between the working woman's look in America and that in Italy?

GA: American style tends to be more of a dress code. I have always admired the practical intelligence that it expresses, like that of commuting to the workplace wearing comfortable sneakers, then slipping on a pair of elegant heels once you've arrived. The dress codes in Italy are much more confusing and often mistake carelessness for a sense of freedom.

NG: After nearly 40 years designing, why do you think your designs are still so relevant?

GA: When I started Giorgio Armani in the mid-'70s, I realized that women needed a way to dress that was equivalent to that of men—something that would give them dignity, an attitude that would help them handle their work life. It wasn't to show off; it was a style that was basic, simple, rigorous—not the exclusive prerogative of a successful manager, but rather of anyone who wanted to approach a career seriously.