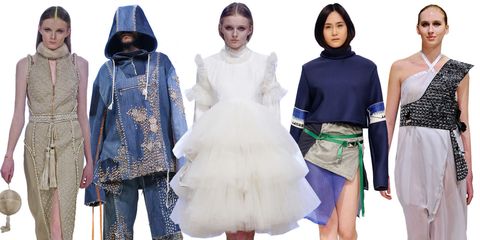 Earlier this month, a verdict came down from Boston Consulting Group, which had been charged with investigating and reinvigorating New York Fashion Week: Do whatever you want. Lol.

While the study's suggestions—timelier presentations, biannual consumer-targeted activations, the whole "buy now, wear now" thing—might not have been the silver bullet all the burnt-out designers and editors were hoping for, they did officially grant fashion the freedom to change. The laissez-faire direction NYFW might go in as a result? Vancouver's already there.

The city has been putting on its own Fashion Week for more than a decade now, and its attitude is still far more bricolage than Bryant Park (RIP). Take a single venue, a drag queen emcee, a rotating cast of designers of both women's and menswear, throw in an open bar, and open it to the public. Raucous and full-on Party Time, to be sure, but can it actually work for a multi-billion-dollar industry?

As someone who's done the NYFW shuffle—and who attended Vancouver Fashion Week for the first time last month—it kind of, weirdly, maybe could.

The production was a bit too prone to delays and at times the proceedings leaned perhaps a bit too egalitarian (show-goers mobbed the runway between every designer), but when it comes down to it, isn't that what fashion is to the public? Fun, over-the-top entertainment?

To the press and buyers, not having to contend with traffic and a schedule during which seven different, equally important events occupy the same time slot was probably the biggest positive, but the convenience of re-see appointments (a chance for industry folk to get a closer, more intimate look at a line) in the same building the day after shows came in a close second.

With some polish and some modification to accommodate many more designers, the Vancouver model could conceivably solve NYFW's problems—at least the logistical-nightmare part. The point now is that we shouldn't be afraid to start over, to rethink The Way Things Have Always Been Done. Sometimes, the simplest plan is best.

To get an inside sense of VFW, see my Snaps from the @MarieClaireMag Snapchat account here: