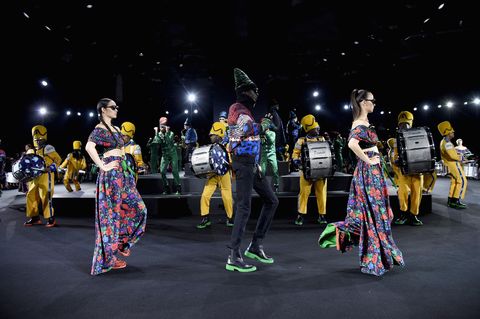 When H&M first announced that its next designer collab would be with Kenzo, we were sure of two things: 1) The collection would be wait-in-a-line-around-the-block worthy and 2) creative directors Carol Lim and Humberto Leon would put on one hell of a show...We were right.

Here's every single thing that blew our mind at last night's Kenzo x H&M show at Pier 36 in NYC.

As Opening Ceremony and Kenzo shows of season's past have proved, Lim and Leon don't simply send models down the catwalk and call it a day. It's hi-concept theater from beginning to end.

Dancers, beatboxers and a string quartet… oh my! 💣💃🏻🎺 #KENZOxHM

Forgoing the Gigi-and-Kendall-led gaggle of top models, they looked to Watts 103rd Street Rhythm Band and an army of dancers directed by Jean-Paul Goude to put on a magical performance set to a custom, high-octane loop of Sam Spiegel's "Express Yourself."

2. The Twirls, Whirls, and Pirouettes

We have Leonardo-DiCaprio-levels of love for models, but damn if these voguing-style moves aren't everything.

When I love fashion because it's fun, creative, and a vehicle for expression. Yay @kenzo x @hm #kenzoxhm 🎉🎉 (Check my story for more dance and drumming highlights)

It was a full-on rave, metallic confetti et al.

5. Uh, the Collection Itself!!

From the skin-tight zebra print separates to the floaty maxi-dresses, seeing the collection on the dance floor gave us a whole new appreciation for the energizing color palette and refreshingly-wearable silhouettes.

From letting the performers-cum-models rock their natural textures to bleaching arches just because, the you-do-you attitude was everywhere.

7. The Celebs Rocking the Collection

Naturally, the front row was packed with celebs including Lupita Nyong'o, Chloë Sevigny, Charli XCX, and Halsey who each put their own head-to-toe spin on the collection's wares.

Partygoers (ourselves included) vibed out to the rapper's "You Can Do It" while sipping Moët & Chandon and nibbling on dumplings. If that's not living, we don't know what is.