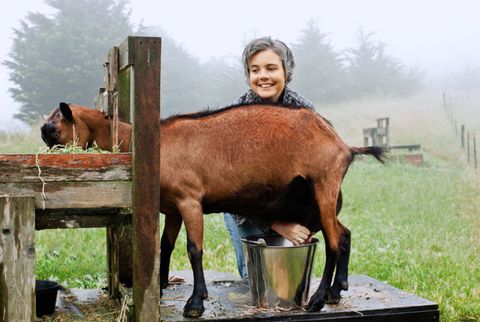 Backstory: When I was young, my grand-mother told me stories about the farm she grew up on. Farming's in my blood, and my work is grounded in the values she taught me — making policy changes for good, clean, fair food. I think she'd be proud.

Bold move: I went to the University of Minnesota's College of Agriculture, where biotech companies had a disturbing influence. The  Department of Agronomy was developing a "Roundup Ready" soybean gene, to allow plants to withstand Roundup, a herbicide from Monsanto, the leading producer of genetically engineered seeds. Despite studies showing Roundup was toxic — and the fact that farmers had to purchase the seeds yearly instead of saving them from one season to another — there was no talk about the implications for rural communities. Worker issues weren't on the curriculum. To raise awareness, I organized lectures on the rights of migrant farm workers, and cofounded Centro Campesino, a nonprofit group that advocates for Latino and migrant agricultural workers through community organizing.

Turning point: In 2005, I joined San Francisco's Pesticide Action Network (PAN). We work to ban pesticides and support sustainably grown food. I'd just been diagnosed with an auto-immune disease, and I believe it's linked to environmental contaminants. Autoimmune diseases are increasing in women, but research on the link to chemicals is lacking. I want to focus on the causes of these illnesses.

What's next: PAN recently helped convince the U.S. to end the use of endosulfan, a highly toxic insecticide linked to autism and birth defects. We are the world's third-largest consumer of pesticides, and people are realizing they've been part of a huge, toxic experiment. We want to ensure liability rests with the corporations that make — and market — these contaminants.

Backstory: When I was 7, my big brother was shot and killed in our South Bronx neighborhood. Woodlawn, his cemetery, was one of the most lush, green places I'd ever seen. As kids, we couldn't experience nature here, and I wanted to change that.

Bold move: When I came back to the South Bronx after graduating from Wesleyan University, I read that Mayor Giuliani was opening a waste facility nearby. Forty percent of the city's commercial waste already came here — this would double that. I was dumbfounded, and organized protests; at one hearing, we got more than 700 people. They stopped the meeting when the stenographer ran out of paper; the waste facility never opened. In 2001, I founded Sustainable South Bronx (SSBx) to support restoration projects like the Bronx Greenway, which will improve air quality in a neighborhood where one in four kids has asthma.

Turning point: In 2005, the MacArthur Foundation called to say I'd won their "genius" fellowship. They had to explain a couple times that the money was actually for me — I kept telling them to make the check out to SSBx! I was so poor that if I hadn't been living at my boyfriend's, I could have been homeless.

What's next: In 2008, I left SSBx to found the Majora Carter Group, a green economic consulting firm that develops investment opportunities in marginalized communities across the U.S. There are so many other "South Bronxes" out there!

Vital stats: Founder of organic apparel company Under the Canopy, and FASE, a sustainable lifestyle, clothing, and accessory brand.

Backstory: Nature fuels me, and in college at UC Berkeley, I had a vision of creating an ethically profitable, environmentally sustainable, socially responsible company. I went on to found a holistic health and nutrition center in New York; soon, I saw the connection between food and fiber. Conventional cotton is a leading cause of air and water pollution. Understanding that the issue was bigger than what we put in our bodies, I left the center in 1996 to start an organic clothing and home fashion brand.

Bold move: When I started Under the Canopy, organic clothing was crunchy and frumpy. So I focused on style, quality, and fit, partnering with Indian nonprofits to convert farmers from conventional to organic cotton. I operated out of my house; my sister and sisters-in-law were the catalog models.

Turning point: People thought I was insane to try and combine the worlds of ecology and fashion. The environmentalists hated the fashion industry because of the toxins and materialism; the fashion designers didn't want to compromise their style by using organic fabrics. But women got it — they like to feel good about their purchases. In a few years, we were mailing more than one million catalogs a year.

What's next: With my new line, FASE, I want to develop educational campaigns for local-to-global engagement. My goal is for organic, fair-trade, and sustainable fashion and textiles to become mainstream. Almost 20 percent of industrial water pollution comes from treating and dyeing fabrics, but textile companies are thinking differently about how they develop products. We're moving in the right direction.

This content is created and maintained by a third party, and imported onto this page to help users provide their email addresses. You may be able to find more information about this and similar content at piano.io
Advertisement - Continue Reading Below
More From Fashion
Fashion Test Drive: Tacori Wedding Bands
Created for From Marie Claire for Created by Marie Claire for
Tacori
Dresses That'll Carry You From Season to Season
Advertisement - Continue Reading Below
The Black-Owned Lingerie Brands Changing the Game
Fall Hard for These All-Season Ankle Boots
What We're Wearing on Our Summer Escapes
The Summer 2021 Trends You'll See Everywhere
Found: The Best Bra Brands
A Fashion Psychologist on Post-Pandemic Dressing
What Rebecca Minkoff Wears to Work
The Fanny Packs That Totally Won Us Over