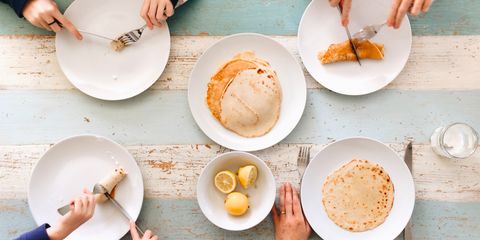 Pancakes for the table, or PFTT, is what it sounds like: Two or more people go out to breakfast or brunch (or lunch), and, seeing that pancakes are on the menu, order a pancake entree to be shared by the entire table, either before, during, or after the main meal.

PFTT is one of those trends that has its genesis mainly in common sense. "It's actually an old diner move," points out Jen Carlson, editorial director of Gothamist and New York diner historian. A move that is gaining traction. I personally chalk it up to two factors: Restaurants presenting diners with increasingly inventive variations on the pancake theme in order to justify higher prices (lemon ricotta is just the base now), and diners being more aware that dessert for breakfast is not the best habit, health-wise. But with PFTT you can have the egg-white omelet and eat your pancakes too.

Here are some reasons you should make Pancakes for the Table part of your self-care routine.

1. You Want the Pancakes and So Does Everyone Else

You know that thing where two people go out to dinner and it takes a full minute of scripted ritualized conversation to come to the "conclusion" that "it would make more sense" if we ordered a bottle of wine rather than glasses, even though we have always, always lighted upon this same eureka! moment? Well, PFTT is kind of like the new bottle of wine, only it doesn't in any way replace it, and in fact, they can go together. Pretty much every PFTT order starts with one person going, "Mmm, these Heirloom Cornmeal Avocado Brown Butter Pancakes with a Drizzle of House-Made Maple Baby Blackberry Syrup sure do look tempting..." and the other person saying, "I was looking at those, but I'm trying not to do sugar..." and then the first person says,"I have an idea..." and a new PFTT convert is born.

PFTT is kind of like the new bottle of wine, only it doesn't in any way replace it, and in fact, they can go together.

2. An Entire Entree of Pancakes Will Make You Feel Like Crap

If you get pancakes as your entree and your entree alone, you'll likely crash later, because, sugar. You'll also be hungry again sooner. It's science. You know this: It's why you know you need to get an egg dish. (Though this is not at all an indictment of getting pancakes as an entree if that's what you want! Some of my most memorable and cozy naps have been planned and executed this way.)

3. Pancakes Are So Expensive Now

In New York City, it's possible to go to a pretty normal restaurant and be asked to pay $19 for a pancake entree. That is BS. Remember school and church fundraisers from when you were a kid? Weren't they usually either pancakes or spaghetti? Have you ever thought of why? It's because pancakes (and spaghetti) are the absolute cheapest things to make in the entire world. And the easiest! Even those weird people who pride themselves on not being able to cook and brag about only having, like, Sriracha and champagne in their fridge know how to make pancakes. Even with all the bells and whistles restaurants are using to lure customers into getting the pancakes, those things probably still have one of the highest margins in the biz. (I reached out to three popular New York City brunch restaurants for this story to confirm this, but they didn't respond, because it would be absurd for any restaurant to confirm this. So let's just say that it is almost certainly true that pancakes have a higher margin than most brunch items.)

4. "Pancakes for the Table is a Power Move"

I didn't know about this until I began my extensive research for this story, but the very funny comedian Liza Treyger called PFTT "a power move" on Late Night with Seth Meyers in 2016:

“Pancakes for the table? That’s a power move.” — @glittercheese pic.twitter.com/RaLgT77QsO

So let's just say that it is almost certainly true that pancakes have a higher margin than most brunch items.

A friend told me that "Twitter would get mad at me" if I acted like I invented PFTT, which I'm not, although I do think most people who get PFTT "invent" it spontaneously because it's extremely obvious...? But anyway, here is the person my friend called "the father of the Pancakes for the Table Movement:"

I bow before Twitter as one of his (or any other self-professed parents of this "movement" who might reveal themselves) humble evangelists.

What? You had no idea this post was going here, but MarieClaire.com's very own Digital Director Sally Holmes, upon hearing my pitch for "something about, I dunno, like, how everyone orders pancakes for the table now?" informed me that she and her boyfriend MET because of a PFTT situation! Her tale:

"I was at a diner enjoying chicken fingers and hot chocolate (a combination countless people have told me is disgusting) with a friend after a night out. It was around 11:30pm and I was minding my own business when a guy, who was also at the diner with his buddy, walked by our table and started talking to us. I have no idea what he said to kick off the conversation but I do remember thinking, who is this person? and then, when he took the liberty of sitting down in the booth across from me, why is this person talking to me? When I saw his food being delivered to his table where his abandoned friend was sitting, I said, "don’t you think you should go back to your table and eat your food?" He responded that yes, he should, and that he’d ordered pancakes for the table if we’d like to join them. To the complete shock of the friend I was with, I said "yes," and we joined them. We now live together. He literally had me at 'pancakes.'"

AND SEE, NOW WE'RE BACK TO DINERS. (Also, chicken fingers with hot chocolate is disgusting.)

Anyway, if you haven't tried it, or if you do it already but for some reason need validation: Pancakes for the table is cool! But nobody should charge $20 for pancakes. Come on.