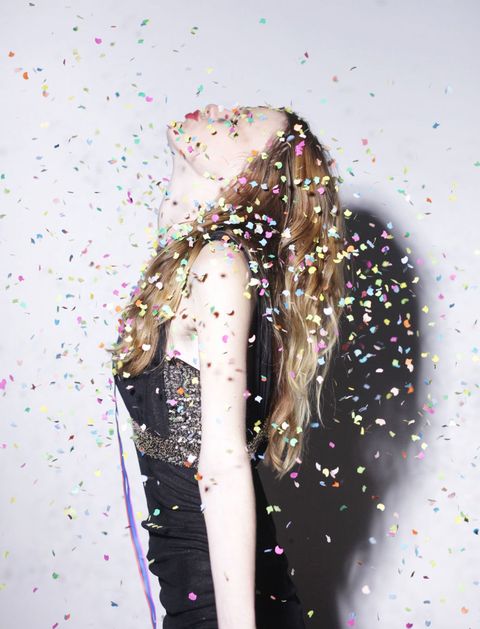 Hangovers are The Worst. The headache, the exhaustion, the nausea, the foggy-headedness, the mouth that feels/tastes like Burning Man—and that's all before you even look down at your phone and scroll through your drunk texts.

Luckily, there are plenty of so-called remedies on the market that promise to prevent all of those 😷 feelings before they ever get a chance to kick in. Supposedly. We tested offerings in the major remedy categories—pills, drinks, IV therapy—along with a more old-fashioned method (spoiler: an egg and cheese sandwich) during the booziest time of year (read: the holiday party season) to see which will guarantee you kick off 2017 without that traditional champagne hangover.

Hangover Cure No. 1: The Over EZ Pill

First up: Over EZ, a slim clear pill (available in packs of 12 for $60) filled with what looks like extra-tiny white-and-blue Dippin' Dots. It's actually "ingredients such as B vitamins, Milk thistle, Chicory root, Zinc, Magnesium, Chinese date extract and more," according to the publicist's pitch email, in sets of fast-acting and time release pellets. Over EZ is made to prevent hangovers, which means you knock it back with one of your first drinks during the night before the morning-after. According to its makers, "the Over EZ formula protects the liver and supports the body to help neutralize and eliminate the Acetaldehyde toxin by increasing the levels of the enzyme ADH (alcohol dehydrogenase) and ALDH (acetaldehyde dehydrogenase) in the liver." That's a science-y way of saying it'll help your body get rid of the bad guy that booze lets loose in your body to make you feel like shit.

I tested it out after a "secret snowman" gift exchange with four girlfriends after work on a mid-December Wednesday. We gathered at one of our apartments, ordered pizza, caught up on each other's lives while tearing through gift wrapping, and made a serious dent into our hostess' collection of fancy French wine she'd purchased during a fancy French vacation with her now-ex boyfriend. Revenge is a drink best served in a wine glass. After throwing back approximately the same number of white wine glasses in a Real Housewives episode, I flung myself into a cab home where I thirstily chugged a glass of water with one Over EZ pill. Confession: technically I should've taken Over EZ at the start of the evening—the earlier you take it, the better it works.

The good news, however, is that despite the less-than-usual hours of sleep, the liver full of dry white wine, and the fact that I don't read directions until it's too late—I woke up feeling totally fine. Seriously. A little tired, maybe. But my mouth wasn't sandpaper. My head wasn't pounding like an EDM track. And my sensitive-skin face wasn't red or puffy like Emily Blunt's in The Girl on the Train.

My take: 5/5 glasses of white wine. A Christmas miracle.

Next in line for this super (not-at-all) scientific study was an IV drip. The scene: The office holiday party AKA a three-hour open bar with your boss and coworkers whom you don't exactly want to know what it looks like when you've been at a three-hour open bar. But research is research and, armed with the comforting knowledge that I had a morning appointment at Nutridrip, I enjoyed white wine refills from the bespectacled yet heavy-pouring bartender at our Wednesday night festivities. (Nutridrip, which has two New York City offices with plans to expand, offers IV nutrient therapy.) After last call, the after-party (hey, it was only 9 p.m.!) moved on to a nearby bar and I moved on to whiskey, no ice. In short: the next morning, I felt like Mad Max: Fury Road had run me over. And that's when I got the text that my Nutridrip appointment would have to be rescheduled.

"In short: the next morning, I felt like 'Mad Max: Fury Road' had run me over."

"Your eyes look like whiskey is coming out of them," my cubicle-mate helpfully pointed out when my messy bun and me got to work later that morning. With no hospital-grade hangover cure to bring me back to life, I reached for a classic: a takeout container filled with scrambled eggs, home fries, and veggie sausage patties, washed down with a neon yellow Gatorade. Eggs reportedly contain a hefty amount of cysteine, which helps break down that acetaldehyde toxin, and sports drinks have electrolytes or something, right? The potatoes and patties were to satisfy my hangover-induced greasy food craving.

This method, it turns out, works only on weekends. See: that previous Sunday morning after a holiday house party when, with only a couple hours of sleep and a couple glasses of red wine and room-temperature Glogg the night before, I headed to my local bagel shop and got an egg-and-cheese on everything. It did the trick—that is, once I napped afterwards and finished binge-watching Chewing Gum on Netflix in bed (4 Gloggs/5 Gloggs!). But life isn't an episode of Seinfeld and I couldn't get away with napping under my desk the day after the Team MC holiday party.

I rescheduled my Nutridrip appointment for a few days after Christmas. To fully prepare, and amplify the effects of the holiday weekend's exhausting travel, family-time, and overindulgence, I drank a strong-ish homemade daiquiri and a Pacifico beer while watching the last two-and-a-half episodes of Netflix's The OA. (My steady stream of tears during the finale made me even more dehydrated, I'm sure.)

After a slow, sloth-like start, I made it to one of Nutridrip's Manhattan offices and plopped onto a white leather reclining chair while Elli, the office's super-sweet nurse, stuck a needle I couldn't bring myself to look at into my left arm. I got the "Super Recovery" ($149): An IV hooked up to a pint-sized bag of lactated Ringer IV solution—the clear electrolyte-filled liquid usually seen at a hospital bedside replenishing a patient's lost fluids—as well as a "super vitamin B booster" comprised of 1mg Methylcobalamin and 1ml B-Complex for energy. Elli also gave me a small shot of pain medication, basically liquid ibuprofen she explained, to get rid of my headache. She also let her assistant sit on my lap. (His name is Nigel. He's an adorable rescue Yorkie with his own Instagram.)

After about thirty minutes, the bag drained of its concoction, I felt better. My headache was gone, Nigel was cuddled up next to me, and I felt an espresso shot-level of energy. Only problem: that morning's sluggishness was back by late afternoon. To be fair, that probably had more to do with the fact that I stayed up reading The OA recaps and reviews and less with how effective the IV drip was at curing my hangover symptoms. Before yet another holiday dinner that night (it's still Hanukkah, ya know), and my final hangover cure test, I got in a 20-minute nap and felt totally refreshed.

Between washing down about one million latkes with a couple glasses of red wine at dinner with my boyfriend and his parents and another Pacifico beer nightcap while watching Postcards from The Edge, I gulped down a 3.5-fl. oz. bottle of Never Too Hungover ($2.50 at GNC), the self-described "World's Leading Hangover Prevention Drink." The ingredients: milk thistle, aloe vera, green tea extract, potassium, vitamin B. The concoction promises to detoxify your liver, promote blood and oxygen flow, hydrate, and boost energy. They forgot to mention that it tastes like a warm Arnold Palmer with a splash of dishwashing soap. While I awoke feeling sleepy and cotton-mouthed, my head was completely clear, so it was sort of worth it.

The winner? No one. Being hungover sucks. And the only way to beat it, really, is to nap through it, order takeout from bed, binge-watch something, repeat. Still, I'd suggest taking Over EZ between champagne toasts on New Year's Eve to avoid any funky tastes, getting out of bed, and feeling too-awful the next day. Oh, and cancel those January 1 early yoga-class-and-brunch plans now. (Come on, did I even have to mention that?) Cheers!

Jen Ortiz Deputy Editor, Cosmopolitan As deputy editor, Jen oversees Cosmopolitan's daily digital editorial operations, editing and writing features, essays, news, and other content, in addition to editing the magazine's cover stories, astrology pages, and more.
This content is created and maintained by a third party, and imported onto this page to help users provide their email addresses. You may be able to find more information about this and similar content at piano.io
Advertisement - Continue Reading Below
More From Food & Cocktails
The Tastiest Starbucks Drinks You Can Make at Home
The Most Delicious Mocktail Recipes to Try
Advertisement - Continue Reading Below
Must-Have Gifts for Home Chefs and Foodies
Delicious NYE Cocktails to Ring in 2021 With
Throw a Fabulous New Year's Eve Micro-Party
Here’s How Two Top Designers Host the Holidays
Presented by
Tanqueray
How to Make the Queen's Boozy Christmas Pudding
How to Create a Lovely Bouquet
Created for From Marie Claire for Created by Marie Claire for
Edible Arrangements
Pro Tips For Sending A Perfect Thank You
Created for From Marie Claire for Created by Marie Claire for
Edible Arrangements
Welcome Fall With a Natural Wine