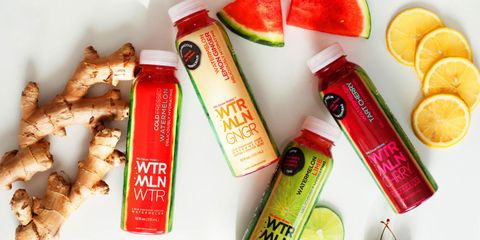 Even though WTRMLN WTR, a line of cold-pressed watermelon water, has been around since 2013 and backed by Beyoncé since last year I'd never actually tried it before. So when they asked if I'd like to try out the three new blended flavors of WTRMLN WTR—called BLNDS naturally—I figured why not? If Beyoncé invests in it, it must be delicious. Right?

Sourced from "ugly" watermelons that are typically discarded, all three new flavors—including WTRMLN GNGR (Ginger Lemon), WTRMLN LME (Lime), and WTRMLN TRT CHRRY (Tart Cherry)—start with the same base as the original flavor of watermelon water (just watermelon flesh + rind) then are blended with organic juices and extracts. With 60 calories and 12 grams of sugar per 8 oz. serving, plus 550 mg of potassium as well as natural antioxidants Citrulline and Lycopene, these watermelon waters are technically better for you than coconut water and other sports drinks like Gatorade. But do they taste good?

To find out, I enlisted MarieClaire.com's staff to help me taste test these Bey-approved beverages. (Note: While a lemonade flavor—AKA WTRMLN LMN—was launched last summer, we didn't get to try that one out. 😥)

Here are our thoughts:

"If I were dancing with all my single ladies, I would rehydrate with the new Watermelon Lime flavor," says Danielle McNally, features editor at Marie Claire. "It's like Gatorade, but healthier, and doesn't leave that weird film on your tongue."

"Ginger is my favorite," says Jazmin Jones, Marie Claire's video producer. "The lime tastes too similar to Gatorade for me. I usually love anything with cherries, but the flavor was a bit...off. Criticisms aside, I'd go for this before drinking coconut water."

Others weren't as forgiving of the drinks.

"If I were *not* a card-carrying member of the BeyHive, I would say that I hated this watermelon juice and want NOTHING TO DO WITH IT," says Mehera Bonner, Marie Claire's senior entertainment editor. "But I am, so I won't."

"The one thing we could all agree on was that all of the flavors—especially the original one—smell a little too much like a carved pumpkin."

The one thing we could all agree on was that all of the flavors—especially the original one—smell a little too much like a carved pumpkin. The rind and seeds of watermelons and pumpkins must be more similar than you'd ever think.

That said, with less sugar than coconut water—and 40 percent less than orange juice!—watermelon water is definitely better for you than other sports drinks and would make an excellent alternative to soda if you're looking for a new mixer this weekend for your cocktails.

Another plus? A portion of the proceeds from WTRMLN WTR BLNDS will also be donated to Whole Planet Foundation, which aims to alleviate poverty through microcredit in communities that supply Whole Foods stores with their product.

The three new flavors will be sold for $3.99 each and will only be available at Whole Foods through this July.

Lyndsey Matthews Lifestyle Editor Lyndsey Matthews is the Lifestyle Editor across all of Hearst Digital Media's brands.
Advertisement - Continue Reading Below
More From Food & Cocktails
The Delicious Drinks on Starbucks' Secret Menu
Be Fancy, Sip a Vermouth Cocktail
Advertisement - Continue Reading Below
The Tastiest, Fanciest New Year's Eve Cocktails
Elevate Your Next Toast With a Champagne Cocktail
91 Drinks to Get You in the Holiday Spirit
The World's Largest Starbucks Is Opening
Starbucks' Holiday Cups Are Back In Stores
Found: 12 Delicious, Affordable Champagnes
You Can Have Lunch At Lorelai Gilmore's House
The Best Vegan Wines to Indulge In, Guilt-Free