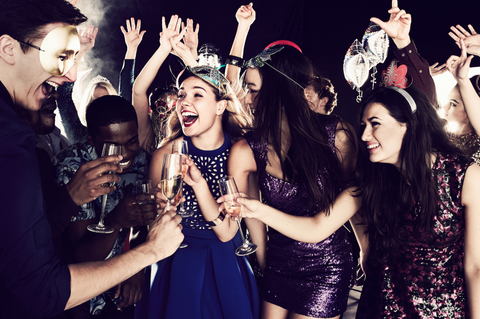 FYI: The USDA recommends that a woman limit herself to one drink per day, and no more than seven drinks per week. (Men have higher allowances, because women metabolize alcohol differently and become intoxicated from fewer drinks. Does equality exist ever?) But is that what we're actually doing? Here's what you told us:

What's "normal" when it comes to drinking is a relative term—researchers have actually pinpointed specific genes that allow certain individuals to consume larger quantities of booze than others, says Petros Levounis, M.D., chair of the department of psychiatry at Rutgers New Jersey Medical School. Interestingly, those types of people are more prone to alcoholism because they can think they're "invincible" and overdo it.

But no matter if you consume seven drinks a week or seven drinks in the course of a single night, the cumulative effects of consuming alcohol wreak havoc on your body. Your liver and heart don't care when you drink, says Levounis—your risk of developing problems like breast cancer and heart disease is all the same.

And while pinpointing a specific amount of alcohol that is "okay" is impossible, we can help you determine whether you need to lay off the sauce. As Levounis puts it: Can you go to a party and not drink excessively? How about capping happy hour at two drinks? Or, even better, do you *willingly* (keyword there) drink heavily despite knowing you'll throw up/black out/potentially do or say something you'll regret?

If that sounds like you, you're going too hard and should scale back—or skip drinking altogether, and maybe even seek help. Better safe than sorry.

The Link Between Working Late and Alcohol Abuse

Binge Drinking Can Change Your Genes in a Scary Way