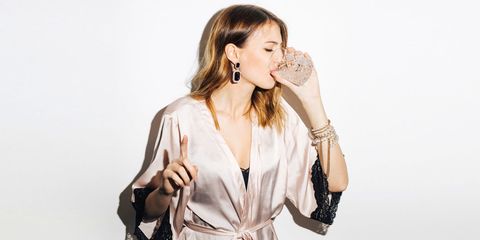 Ah, alcohol. The love-hate relationship is so real. While we would never endorse binge-drinking, we get that sometimes having five too many is a real thing, and that *sometimes* the night's plans are to get your drink on—heavily. So what can you do to make sure you're not sick as a dog the next day? We talked to Dr. Jeremy Fischer of Vitality Integrative Medicine to get the down and dirty on what you can do to not feel like death the morning after drinking. Here's your helpful guide.

1. Drink fluids in advance. "First off, you should know that hydration is really important. Alcohol is a diuretic, causing dehydration, which is a major cause of hangover symptoms," says Dr. Fischer. "So if you know you'll be drinking later, start preparing in advance by drinking plenty of fluids throughout the day. Water with a pinch of salt per cup is one option. Coconut water is even better, as it's full of electrolytes (which you'll be peeing away later, so better stock up in advance!)."

2. Avoid caffeine the day of drinking. "Caffeine is also a diuretic. Combined with alcohol, it will just exacerbate your fluid losses," says Dr. Fischer. As far as day after drinking? Stick to one cup (if you can't function without) as it can definitely help with any headaches, but drink extra fluids to offset the diuretic effect.

3. Eat before drinking. It's kind of a no-brainer, but the consequences are *real* if you don't. "Having food in your stomach will slow the absorption of alcohol into the blood, giving your liver more time to detoxify the alcohol, and causing less buildup of the nasty acetaldehyde, which is responsible in large part for the hangover symptoms," says Dr. Fischer. "Aim for substantial foods with protein, carbs, and/or fats. Continuing to eat while drinking is a good idea too."

4. Take antioxidants. "They help the liver to do it's job of breaking down the alcohol, and reduce the inflammation caused by free radicals from alcohol digestion." Specifically, try vitamin C (Dr. Fischer recommends 500 mg to 2 grams, two to three times a day, but make sure you increase the dosage slowly as too much at one time, while perfectly safe, can make you, uh, go to the bathroom a lot more if you catch our drift. You can also try NAC, 400 mg two to three times a day. "Start the day of with your dosages, and continue the day after drinking, whether or not you have a hangover, as you will definitely have depleted your antioxidants. Also take a good B complex pill to help detox."

6. Drink slowly and in moderation. "Pacing your drinking will give the body more time to break down the alcohol, and decrease your chances of getting a hangover. Try sipping instead of gulping (or chugging)." A good rule of thumb—if you're drinking something with ice cubes, pace it so that some melt before finishing your drink. "This will further dilute the alcohol and improve hydration."

7. One glass (or more) of hydrating fluids after every drink. "If you've ever wondered why when you drink it seems like you're peeing out way more than you're taking in, it's because you probably are," says Dr. Fischer. "This strategy will help replace the fluids and electrolytes lost while drinking. Water is okay, but juices or coconut water are best. If you just have water, add a pinch of salt to it for electrolytes."

8. Stick to clear or lighter-colored alcohols. "The darker-colored alcohols tend to have more congeners AKA impurities which have been associated with more severe hangover symptoms. Bourbon has the most congeners, and vodka has the least."

9. Avoid carbonated drinks. "Carbonation increases the rate of alcohol absorption, putting more stress on the detox process in your liver."

10. Avoid smoking. "A study has actually shown that smoking with drinking resulted in worse hangover symptoms than drinking alone."

11. Get an IV drip. "IV (intravenous) therapy brings needed hydration, vitamins, and electrolytes directly into your bloodstream where they're needed," says Dr. Fischer. "Various doctors and clinics across the country currently offer this therapy, which can be done either before or after drinking to restore fluids and nutrients, and assist detoxification. Receiving your nutrients intravenously has clinically been observed to be more effective than just taking them orally."

Jeremy Fischer is an integrative doctor in Los Angeles, making use of IV therapy and more at his clinic, Vitality Integrative Medicine. He specializes in chronic disease care and anti-aging medicine.

Samantha Leal Senior Web Editor I'm Sam, the senior editor at MarieClaire.com.
This content is created and maintained by a third party, and imported onto this page to help users provide their email addresses. You may be able to find more information about this and similar content at piano.io
Advertisement - Continue Reading Below
More From Health & Fitness
Power Pick: SoulCycle's At-Home Bike
Yes, You Should Be Taking a Probiotic Every Day
Advertisement - Continue Reading Below
The Best Workout Apps for Women Who Want Results
Pilates Mats for Crushing Your Fitness Goals With
Our Favorite Yoga Apps for Beginners
Stress-Relieving Gifts That Will Put You at Ease
How Do We Find Joy Again?
Dr. Fauci's Advice for Keeping Your Immunity Up
How to Build a Mini Gym at Home
Transitioning in the Age of Zoom