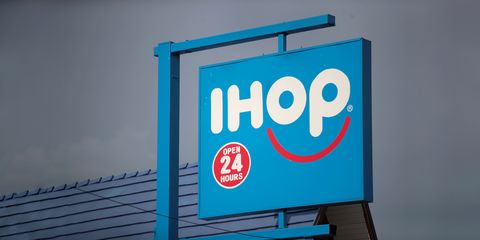 Menstrual equity—that is, equality in how people who have periods are treated by society—has made some advances in recent years. The movement has seen a groundswell of support for measures like repealing the tampon tax and making sure menstrual products are affordable and available to school kids, inmates, and homeless period-havers alike. Visibility for periods is crucial to getting rid of menstrual stigma and ensuring a more equal and feminist world.

So what does that have to do with diner pancakes? As it turns out, a surprising amount. On Monday, the restaurant chain formerly known as International House of Pancakes, or IHOP, announced that it would be rebranding to the International House of Burgers, making its new nickname IHOb (stylization theirs). The company even unveiled a new logo:

Cool!, I thought. I was just thinking there weren’t enough burger places in America. And sure, “Hob” isn’t really word and it therefore makes saying the restaurant’s name slightly awkward, but it’s great to see a company actively combating the scourge that is breakfast food-centric restaurants.

But the internet was quick to notice something else about the new logo:

You know, this iHob logo now looks like the logo we have here for tampons.

But that’s none of my business. ☕️🐸 pic.twitter.com/yL77AMYJsM

Yup, it's the exact same font as the one o.b. tampons use. But whether or not you agree that IHOb should have changed its name, we can all get behind menstrual equity. Sure, IHob maybe didn’t mean to support this cause, but we should take the opportunity to talk openly and honestly about periods anywhere we can get it. Don't look a tampon horse in the mouth, or something.

And look at the important dialogue we're already having:

Shout out to IHOB for recognizing that tampons are a basic health care need for women and not deserving of a luxury tax. pic.twitter.com/Fun0V3sh9O

This is very underwhelming. I was really hoping it was gonna be free tampons. pic.twitter.com/TNUjzekMRv

Dang, I was hoping IHOB stood for "I Have OB (tampons)." https://t.co/HDcn8kdTJI

Related Story
Could Your Period Get You Fired?
Cady Drell Culture Editor Cady is the Culture and News Editor for MarieClaire.com, as well as a noted Timothée Chalamet enthusiast.
Advertisement - Continue Reading Below
More From Health & Fitness
How to Be More Spiritual in 2020
Sleep Supplements for Sweeter Dreams
Advertisement - Continue Reading Below
31 Must-Have Workout Apps for Women
Are New Year's Resolutions Still a Thing?
Gifts That Will Delight and Destress
Products Every New Mom Will Love
Found: The Best Running Sneakers
Debunking the Dangerous Hymen Myth
The Virginity Testing Crisis
Carpe Diem? YOLO? Here's What a Shrink Has to Say