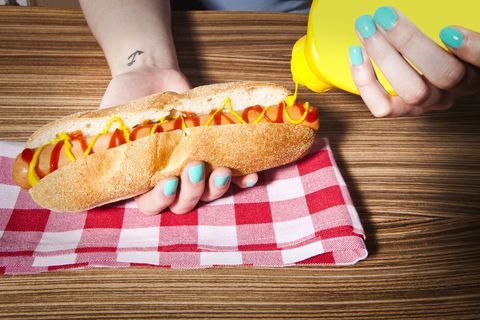 One of the things I have put on the internet is that I frequently snack so hard I have to go lie down. If you can relate to that statement in any way, 1) join my squad? And 2) this Memorial Day weekend, we're doomed.

But even if you go ham on the burgers/hot dogs/meat-fest that is every American holiday until the Autumnal Equinox, it's not like you can't ever eat again, right? *pauses for nodding* So just accept that you are a monster made a mistake and move forward, says Keri Gans, RDN and author of The Small Change Diet. It's crucial to not beat yourself up and just continue as normal, she says, because most people tend to react in the following not-productive ways:

The day after you've gone too hard, Gans says, return to your regular, nutritionally sound diet. No matter what specifically you've ingested the night before, up your water intake (especially effective for sodium-laden foods or, ahem, alcohol) and get moving, even if that's just hoisting yourself from a lawn chair to play pétanque. But what if I'm booked through Monday and can't just abandon my friends because I have no willpower, you ask? You can still join in on the fun, but be smart about clean(er), lighter substitutions. Think seafood and vegetable kebabs instead of cow flesh shaped into patties, green salads dressed with olive oil and vinegar instead of mayonnaise, or frozen desserts made from alternative milks. You might also want to introduce more fiber- and probiotic-dense foods like artichokes and kefir to aid digestion. (Some lemon water couldn't hurt either, hmm?)

Now that we're officially in all barbecues, all the time season, it can be really tough not planting yourself in front of the chips and guac and batting away everyone else's hands because avocados were not put on this good earth for sharing. But with some knowledge and forgiveness, all of us can stay healthy and in the upright position—even me.