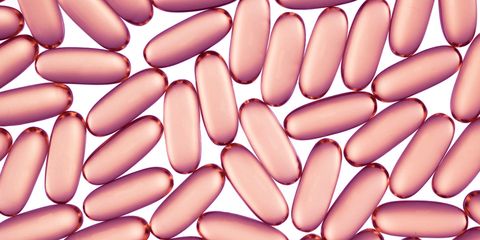 The number one truth you might think you know about vitamin D is that you probably aren't getting enough of it. (Oh, and they put it in milk, don't they?) But just what are we missing out on by Failing to Adult, the title of the movie they make from my autobiography but only if I write the screen adaptation myself? Here, all the benefits of vitamin D you might not know, plus some bad stuff that might happen if you don't change your ways, because fear and pizza are the only things that motivate millennials.

Your bones won't disintegrate like when you drop an eyeshadow compact!

As you may already know, vitamin D promotes calcium absorption so your skeleton doesn't go crumbly or misshapen. That's why, in the 1930s, the government started adding vitamin D to milk—so kids would stop getting rickets and Humpty Dumpty-ing all over the place. In adults, deficiency can cause a similar softening of the bones, which looks like this.

You can eat more cheese!

This only comes in as a benefit if you *cared* about meeting your daily requirement, but if you did, you would then conceivably get to help yourself to an ounce of Swiss, one of the few foods that naturally contain vitamin D. Salmon and eggs are even better sources, so you might be excited to have more of those too, while on the less-appetizing-but-healthy end of the menu, we've got cod liver oil (fishy burps) and beef liver (metallic burps). Of course, some orange juices, milk, and cereals come fortified, though it takes a special 21st-century person to not have some sort of issue with dairy, gluten, and/or sugar.

It gives you an excuse to take a lunch!

Studies have shown that it can take as little as 5 minutes of sun exposure to help maintain adequate vitamin D levels, so if your boss says, "And where do you think you're going?" just reply that you're stepping out to avoid getting osteoporosis like your granny. (If she protests, keep in mind that this is America and that there's definitely enough here for a frivolous lawsuit. Probably.)

While further research is still needed to determine if vitamin D actually does anything in this department, or if not getting enough does something else in a different, more harmful department—definitely management, if we're continuing with the analogy—some trials suggest that it could play a role in preventing colon, prostate, and breast cancers. But in other trials, it didn't do much of anything. And in yet more trials, people with the highest levels of vitamin D still got cancer. But until science comes back with an answer, it doesn't make that much of a difference We need vitamin D to support overall health, so keep choking down that cod liver oil and chasing it with a walk around the block.

The New "It" Nutritional Trick

Chelsea Peng I'm Chelsea Peng, the assistant editor at MarieClaire.com.
Advertisement - Continue Reading Below
More From Health & Fitness
How to Have Healthy Convos Around Climate Change
How to Build a Mini Gym at Home
Advertisement - Continue Reading Below
Can't Find a Good Online Workout Class? We Gotchu
What It's Like to Be a Doctor Fighting Coronavirus
The Best Workout Apps for Women Who Want Results
LVMH Perfume Factories to Produce Hand Sanitizer
Why Social Distancing Is So Important Right Now
I Tested Positive For the Coronavirus
What Staying Awake for 36 Hours Does to Your Face
The Mental Health Apps Professionals Recommend