Krishanti Vignarajah, the former policy director for Michelle Obama who spearheaded Let Girls Learn, announced her run for governor of Maryland in August, two months after giving birth. Suffice it to say, she knows about keeping it together on the campaign trail.

What do you have in your handbag?

"Business cards (Vignarajah is a tough name to spell!), clean diapers, and mascara."

"Always carry flats. I’m barely 5'2", so I can use a little elevation, but there’s often a moment late at night when I can’t take my heels. But if Maryland elected 4'11" Barbara Mikulski as senator for five terms, then there’s hope for other vertically challenged candidates!" 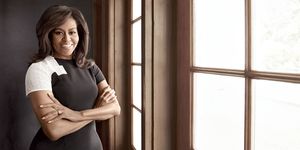 How do you keep your energy up?

"With a newborn, sleep is not on the table. I do get a lot of energy from meet and greets. The other day, I met an 84-year-old who said she was “all in” on my campaign because she’d “be damned” if she sat by when there wasn’t even a single woman in any federal or statewide office in Maryland. So if she can do it, I can, too! Oh, and ice cream helps."

Kayla Webley Adler Features Director Kayla Webley Adler is Features Director at Marie Claire magazine, where she edits the monthly print news and politics section (called News Feed) and writes narrative features, often at the intersection of women’s health and politics.
Jen Ortiz Deputy Editor, Cosmopolitan As deputy editor, Jen helps oversee Cosmopolitan's daily digital editorial operations, editing and contributing features, profiles, essays, news, and more.
Advertisement - Continue Reading Below
More From The Everything Guide to Running for Office
Nine Congresswomen on Why They Almost Didn't Run
How to Deal with Press on the Campaign Trail
Advertisement - Continue Reading Below
How to Build Buzz for Your Campaign
Social Media Tips for the Campaign Trail
How to Conquer Trolls During Your Campaign
How to Raise Money for Your Political Campaign
Advice from the Women of Congress
The Reality of Life In Congress
Nine Congresswomen on Why Women Should Run
The Women of Congress on Why They Ran for Office