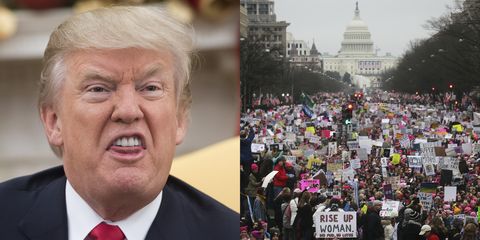 If one of his latest tweets is to be believed, Donald Trump is blissfully unaware of the reasons that women have taken part in the Women's March this weekend. Taking to Twitter to seemingly take credit for the feminist events taking place, Trump said, "Beautiful weather all over our great country, a perfect day for all Women to March."

It's bad enough that Trump felt the need to comment at all, particularly as the event was, in large part, founded in response to policies, ideas, and bills the president himself sought to introduce. But what's worse is the fact that Trump seems to think that the Women's March is a celebration of *his* achievements over the past year.

Beautiful weather all over our great country, a perfect day for all Women to March. Get out there now to celebrate the historic milestones and unprecedented economic success and wealth creation that has taken place over the last 12 months. Lowest female unemployment in 18 years!

In his message to women, Trump continued, "Get out there now to celebrate the historic milestones and unprecedented economic success and wealth creation that has taken place over the last 12 months. Lowest female unemployment in 18 years!"

Not only is Trump taking credit for the achievements of women across America over the past year, he's also attempting to rebrand the Women's March as an event in his honor.

Last year's Women's March took place a day after Trump's inauguration, and the new president was famously upset that marches across the country had drawn much bigger crowds than his own swearing in.

But it's impossible to deny that the Women's March has inspired a movement which includes more women running for office, more people volunteering with and donating to Planned Parenthood, and Time's Up sweeping the nation.

Here are just some of the unimpressed reactions to Trump's attempt to co-opt the Women's March:

FYI
Alaska is also part of our great country. pic.twitter.com/QL0OwIOn8W

Only you could pretend this turnout was to celebrate you.

THIS is why we march...clearly you missed the memo. #WomensMarch2018 pic.twitter.com/ceNjtyDwBB