Today's Top Stories
1
Queen of the Screen
2
Lessons From Frida Kahlo in Embracing My Culture
3
The #endSARS Movement In Nigeria: What to Know
4
A Debate Coach Grades Final Presidential Debate
5
Short Hair Calling Your Name? Try a Bob
AP

In today's outrageous Trump news, the president said that he would have rushed into the school during the deadly mass shooting at Marjory Stoneman Douglas high school in Florida—even if he wasn't armed with a gun.

"You don't know until you're tested, but I think, I really believe I'd run in there, even if I didn't have a weapon, and I think most of the people in this room would have done that, too," Trump said at a White House meeting.

He also took a moment to criticize the officers who didn't stop the gunman during the massacre. "They really weren't exactly Medal of Honor winners," he added. 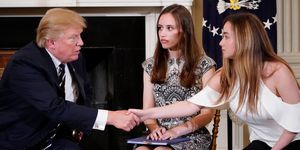 Under pressure to stop gun violence on school grounds, Trump solicited input from the state chief executives during meetings at the White House on Monday.

"Our nation is heartbroken. We continue to mourn the loss of so many precious and innocent young lives," Trump said during the meeting. "But we'll turn our grief into action. We have to have action."

Seventeen students and teachers were killed in a Valentine's Day shooting at the Parkland, Florida high school, sparking a public outcry for new gun control measures, as well as action to improve school safety.

Along with suggesting raising the minimum age for purchase of assault-style weapons, Trump has called for the arming of teachers as a way of warding off potential shooters, providing them bonuses for carrying concealed weapons.

Trump spent time last week hearing emotional pleas from parents and students, where he apparently needed cue cards to help him respond with empathy to survivors.