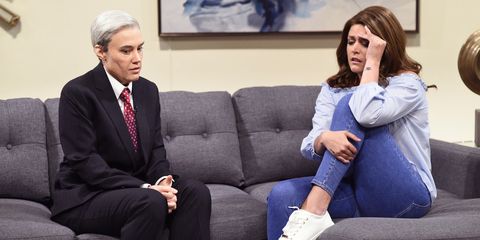 Saturday Night Live just parodied one of the most talked about episodes of television of 2018 so far—the finale of The Bachelor, in which Arie Luyendyk Jr. called things off with Becca, six weeks after proposing to her on the show, only to reignite his romance with runner-up Lauren. But SNL put a political twist on the matchmaking plot.

Instead of Arie, special counsel Robert Mueller shows up to break things of with Becca. But the break-up isn't romantic; instead, Mueller breaks the news to Becca that he won't be charging Trump with collusion in the Russia investigation, because he can't get obstruction of justice (Lauren) out of his mind.

Becca is visibly shattered when Mueller tells her, "I don’t think I can give you everything that you want right now, and I think you sense that," and even more distraught when he reveals, "I think I need to explore the possibility that I might have a stronger case with some other stuff." And when she goes to the restroom to cry, Mueller, of course, follows her and listens, just like Arie did on the finale.

Related Story
Twitter Is Pissed About 'The Bachelor' Finale

Despite probing him about it, asking in disbelief, "You indicted like 13 Russians and like everything that happened at Seychelles, that means nothing?" Mueller doesn't budge. Exasperated, Becca says what everyone's thinking: "Collusion is literally the only thing that I’ve been looking forward to the past year."

But the crux of it is, Mueller "can’t commit to collusion right now," in the same way that Arie Luyendyk Jr. couldn't commit on The Bachelor finale. It'd be funny if it wasn't so close to the bone.