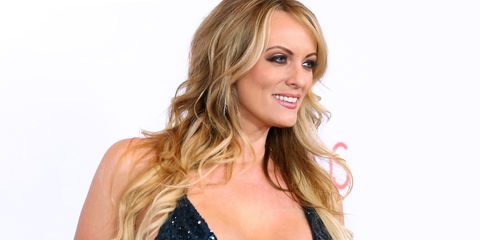 Stormy Daniels' interview on 60 Minutes didn't provide many new revelations, but it still managed to anger Donald Trump's lawyer. And as a result, she's updated her lawsuit against the president to reflect the additional threats she's receiving.

According to Deadline, Daniels was served with a cease-and-desist letter after her interview aired, claiming that she made "false and defamatory statements" on air. Michael Cohen—Trump's attorney who paid Daniels approximately $130,000 in hush money, just 11 days before the 2016 election—had his own attorney serve Daniels with the cease-and-desist letter.

Last night, Daniels told Anderson Cooper that she's revised her own lawsuit, so as to sue Cohen for defamation, for his continued claims that her stories about Trump aren't true. Daniels' amended lawsuit reads (via TIME):

"Both on its face, and because of the facts and circumstances known to persons who read or heard the statement, it was reasonably understood Mr. Cohen meant to convey that Ms. Clifford is a liar, someone who should not be trusted, and that her claims about her relationship with Mr. Trump is "something [that] isn’t true." Mr. Cohen’s statement exposed Mr. Clifford to hatred, contempt, ridicule, and shame, and discouraged others from associating or dealing with her."

According to The Hill, Daniels' key point in her updated lawsuit "specifically points to a statement Cohen made last month: 'Just because something isn't true doesn't mean that it can't cause you harm or damage.'"

Daniels isn't backing down, and her updated lawsuit proves that she refuses to be intimidated by Cohen or his attorney.

Related Story
Stormy Daniels' Most Shocking 60 Minutes Moments
Amy Mackelden Weekend Editor Amy Mackelden is the Weekend Editor at HarpersBAZAAR.com, where she writes about entertainment, celebrity news, beauty, and fashion.
This content is created and maintained by a third party, and imported onto this page to help users provide their email addresses. You may be able to find more information about this and similar content at piano.io
Advertisement - Continue Reading Below
More From Politics
Who Will Be in Joe Biden's Cabinet?
Five Women Share Their Stories of Gender Violence
Advertisement - Continue Reading Below
The Global Fight for Black Lives
Michelle Obama on Welcoming the Trumps in 2016
There’s No Such Thing as the “Latino Vote”
Who Is on Joe Biden's Transition Team?
Joe Biden's Youngest Daughter Is An Activist
Joe Biden's Grandkids Are Among His Biggest Fans
Maya Harris Is Kamala's "Bobby Kennedy"
This Is How Much Joe Biden Is Worth