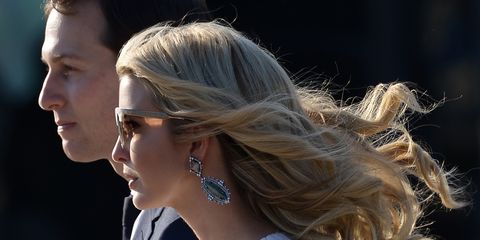 The CEO of Planned Parenthood, Cecile Richards, has written a new memoir, and it details the meeting she had with Ivanka Trump and Jared Kushner regarding the future of the organization.

It was previously reported that Trump had suggested that "Planned Parenthood split up, creating a small operation that ran abortion clinics and a larger one whose health clinics didn’t perform abortions" (via The New York Times). And now, we finally have details of what was actually said during the exchange.

People reports that, according to the author, Richards was wary about meeting with Trump and Kushner in January 2017, but that she was seeking political allies after Hillary Clinton's defeat.

When Speaker of the House Paul Ryan announced that he wanted to completely defund Planned Parenthood, Richards reached out to Ivanka Trump, at the behest of a contact in the fashion industry. She explained, "Even if there was only a sliver of a chance of changing anyone's mind, I owed it to Planned Parenthood patients to at least take the meeting."

Richards reveals in her new book, "Everyone at Planned Parenthood was hoping for the best but preparing for the worst. We brainstormed, planned, and made lists of anyone who might be a potential ally in the administration."

Trump brought husband Kushner to the meeting, and he apparently wasn't shy with his opinions. Richards reveals:

"The main issue, he explained, was abortion. If Planned Parenthood wanted to keep our federal funding, we would have to stop providing abortions. He described his ideal outcome: a national headline reading 'Planned Parenthood Discontinues Abortion Services.'"

And that's not all. Kushner apparently urged Richards to make the change to Planned Parenthood's services quickly, and then he could influence their funding.

Of course, Richards saw through the offer, but she couldn't help feeling that it was a bribe of sorts:

"Jared and Ivanka were there for one reason: to deliver a political win. In their eyes, if they could stop Planned Parenthood from providing abortions, it would confirm their reputation as savvy dealmakers. It was surreal, essentially being asked to barter away women's rights for more money."

In Make Trouble: Standing Up, Speaking Out, and Finding the Courage to Lead, Richards is speaking out about Trump's and Kushner's questionable, and unsuccessful, attempts to influence politics.

Related Story
Ivanka Trump's Secret Plan to Run for President
Amy Mackelden Amy Mackelden is a freelance writer, editor, and disability activist.
This content is created and maintained by a third party, and imported onto this page to help users provide their email addresses. You may be able to find more information about this and similar content at piano.io
Advertisement - Continue Reading Below
More From Politics
Daunte Wright's Death Sparks Protest in Minnesota
41 Surprising Rules First Ladies Have to Follow
Advertisement - Continue Reading Below
Asian American Women on Where to Go From Here
Syrian Journalists Reflect on a Decade of War
How to Show Your Support for the AAPI Community
Activist Lydia X. Z. Brown on Disability Justice
Elisa Crespo: "I'm Not Here to Make History"
What We Know About the Georgia Spa Shootings
Dianne Morales Has Never Listened to the Naysayers
Stacey Abrams on Her Definition of Success