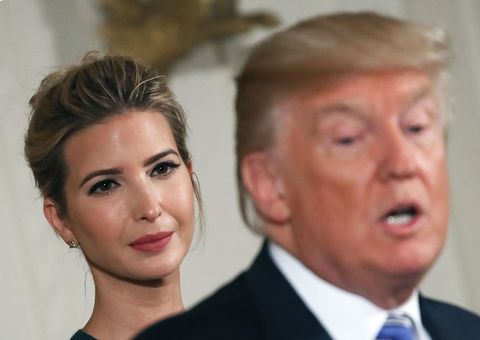 When Donald Trump allegedly walked into a dressing room at a Miss Teen USA pageant (as five contestants recount that he did, though several others contradict their claims), one girl tried to do something about it: She told Ivanka Trump.

Mariah Billado, former Miss Vermont Teen USA, told Buzzfeed last year that in 1997 she approached Ivanka about Trump walking into their private changing areas; Ivanka's response, she says, was a resigned, "Yeah, he does that." (Ivanka did not respond to MarieClaire.com's request for comment.)

To be fair, Ivanka was a teenager herself at the time. (And a girl who later had to deal with a father who made a inappropriate sexual comments about her, no less.) So it's understandable that the future first daughter wouldn't know how to stop such behavior.

The truth is that she could wield an extraordinary amount of power. She just chooses not to.

But Ivanka isn't a child anymore. And as much as the mother-of-three and business woman is infantilized by her father and the media, the truth is that she could wield an extraordinary amount of power. She just chooses not to.

How else can we explain Ivanka's bizarre claim yesterday that it's "unrealistic" for people to expect that she can always influence her father's decisions? She is literally an adviser to the president; influencing Trump is in the job description.

Yet in the interview with the Financial Times where she made this strange statement, Ivanka noted that it's unfair for some critics to believe "that my presence in and of itself would carry so much weight with my father that he would abandon his core values and the agenda that the American people voted for when they elected him. It's not going to happen."

She also said that disagreeing with her father publicly would mean "I'm not part of the team."

And that's the rub: Loyalty to her father's vision, no matter how horrific it might be, is more important to her than actually doing her job or helping the American people.

But Ivanka is right in one way. She didn't make broad promises at any point about what she could accomplish or how she could influence her father to do the right thing. (She just hinted as much.) That was mostly wishful thinking by Republicans (and some naive liberals), horrified at what they had wrought. The hope was that if they crossed their fingers and wished hard enough, the widely-liked businesswoman—clearly favored by her father—would bring some semblance of normalcy to the presidency.

Ivanka took meetings about climate change and reportedly lobbied on behalf of the Paris Accord, yet, as the world saw, that made no difference. Despite her supposed support for women's rights, she also failed at moving reproductive healthcare forward in any meaningful way—even suggesting to Planned Parenthood president Cecile Richards that the organization form a separate abortion unit. The presidential advisor said in her interview this week that she'd like to be judged by her accomplishments in areas she cares about, like "gender equity in the workplace," but she recently supported the scrapping of an initiative experts think could lead to equal pay.

This is a woman—as lovely as she seems on Instagram or during softly-lit morning television interviews—who covers for a bigoted president. A woman who uses her likability to bolster the agenda of a monster. A woman who herself runs a business with questionable ethics and uses the language of feminism to promote her own brand without any apparent concern for women and their rights.

Ivanka said that disagreeing with her father would mean "I'm not part of the team."

In the end, Ivanka is useless—at least to those of us concerned about the future of our country. To the president, of course, she's invaluable.

Ivanka functions as a shield against accusations of misogyny, a salve to his rough edges. She's poised and telegenic proof that Trump couldn't possibly be all bad. That some people believe as much has been posited as a reason why the president won so many votes from white women—they saw Ivanka as his saving grace. Sadly, she will never be ours.

Jessica Valenti Contributing Editor Jessica Valenti is a columnist and author of five books on feminism, politics, and culture.
This content is created and maintained by a third party, and imported onto this page to help users provide their email addresses. You may be able to find more information about this and similar content at piano.io
Advertisement - Continue Reading Below
More From Politics
For Teachers, Going to Work Can Mean Life or Death
Want to Help Moms? Prioritize Menstrual Equity
Advertisement - Continue Reading Below
Abortion Rights Start at the State Level
All of Your Abortion Questions Answered
The Texas Abortion Snitch Site Is Having a Bad Day
The Future of Afghan Women Depends on Us
How You Can Help People in Afghanistan
Andrew Cuomo Has Resigned as NY Governor
Gwen Berry: Athlete, Activist, Olympian
The Anti-Choice Endgame: Power And Control