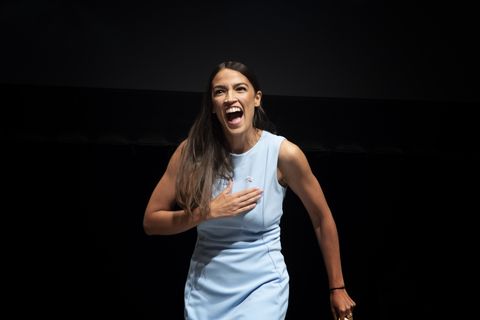 If you haven't yet heard of Alexandria Ocasio-Cortez, you soon will. The 28-year-old powerhouse is running for congresswoman in New York’s 14th District. O already won her primary on June 26, and now she's fighting to unseat longtime incumbent Joe Crowley.

A Latina from the Bronx, as well as a former Bernie Sanders organizer, Ocasio-Cortez self-describes as a “Democratic socialist.” When pressed about this identifier, Ocasio-Cortez explained to Stephen Colbert on The Late Show: “I believe that in a modern, moral, and wealthy society, no person in America should be too poor to live.”

Basically, Ocasio-Cortez is a force to be reckoned with. Since her political rise plunged her into the public eye, however, a few Twitter-centric spats and bumps have sprung up; commentators and conservative politicians alike have attempted to undermine her popularity.

And here's how she responded.

Conservative TV host John Cardillo tweeted a Google Street View picture of Ocasio-Cortez’s childhood home, claiming that it is a “far cry from the Bronx hood upbringing she’s selling.” He wrote, as a description of the picture, that “this is the Yorktown Heights (very nice area) home @Ocasio2018 grew up in before going off to Ivy League Brown University.”

Cardillo’s choice to share images of a congressional candidate’s childhood home on Twitter speaks volumes about the political climate we exist in—and how it exists, at least partially, on social media. Ocasio-Cortez belittled his Tweet with her own.

Florida Representative Ron DeSantis, Republican, referred to Ocasio-Cortez in a speech as “this girl... or whatever she is." He then proceeded to undermine her campaign and general intelligence: “She’s in a totally different universe… It’s basically socialism wrapped in ignorance.”

Ocasio-Cortez took to Twitter in response, wielding a few choice words about what, exactly, she is.

Flashback to July 10: Ocasio-Cortez won the primary in her neighboring 15th District, that day, too, in a write-in campaign.

She’s not even running in that district.

Zoe Harris Zoe is a contributing writer at MarieClaire.com; she covers celebrity and news.
This content is created and maintained by a third party, and imported onto this page to help users provide their email addresses. You may be able to find more information about this and similar content at piano.io
Advertisement - Continue Reading Below
More From Politics
Kristin Urquiza Wants Justice for COVID-19 Victims
A Breakdown of VP Harris's Net Worth
Advertisement - Continue Reading Below
WH Announces Removal of the Hyde Amendment
What Liberation Means This Juneteenth
Kathryn Garcia: It's Time to Step Up or Shut Up
A Valedictorian Speaks Out Against Abortion Bans
Standing Between Care and Violence
Seeking Healing a Century After the Tulsa Massacre
What to Know about Texas's Abortion "Trigger Ban"
A New Book Invites Us to Rethink Menstrual Equity