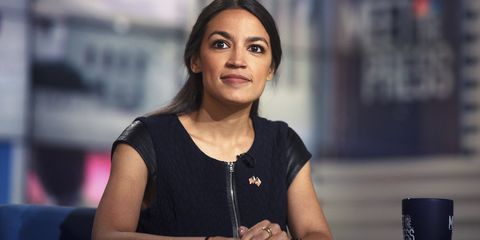 The news came as a shock to Ocasio-Cortez, who wasn't even pursuing a campaign in the neighboring district. "Shockingly—and I’m told this is not a joke—we have ALSO won a primary in the neighboring 15th Congressional District via write-in campaign on the Reform line!" she wrote on Twitter.

Since politicians are prohibited from holding two offices simultaneously, Ocasio-Cortez announced that she will continue her Democratic Socialist campaign in the 14th district. "While I am honored that so many Bronxites are excited about our campaign, I will remain the Dem nominee for NY-14," she explained.

Shockingly - and I’m told this is not a joke - we have ALSO won a primary in the neighboring 15th Congressional District via write-in campaign on the Reform line!

While I am honored that so many Bronxites are excited about our campaign, I will remain the Dem nominee for NY-14. https://t.co/edidvU5sOr

If the Bronx-born candidate defeats Republican Anthony Pappas in November, Ocasio-Cortez will become the youngest woman elected to Congress. “Women like me aren’t supposed to run for office,” she said in her (now viral) campaign video. The daughter of a Puerto Rican mother, Ocasio-Cortez has set out to prove that women of color (who are historically underrepresented in the Unites States government) deserve a seat at the table. At this rate—she shows no signs of slowing down. And, clearly, the people of the Bronx don't want her to.

Related Story
Alexandria Ocasio-Cortez's Historic New York Win
Ruby Buddemeyer Beauty Editor Ruby is the beauty editor at Cosmopolitan, where she covers beauty across print and digital.
Advertisement - Continue Reading Below
More From Politics
Behind the Controversy at the Women's March
Women Are Not Granted Equality in the Constitution
Advertisement - Continue Reading Below
Electability Is About Us—Not the Candidate
Everybody Running for President In 2020
Time’s Up for Wall Street
Women of Color Ruled Last Night's Debate
Cory Booker, Rosario Dawson Are Traveling Together
Is Megyn Kelly a Feminist or What?
Door Knocking With Field Organizers in Iowa
“I Was Illegally Billed Seven Times for My Rape”