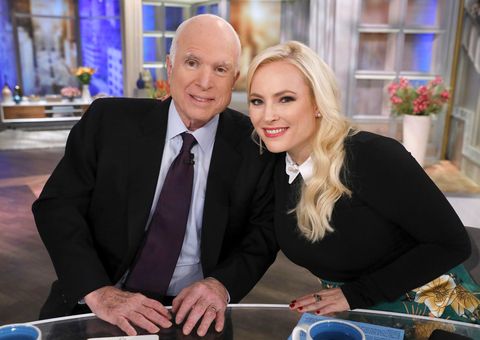 On Saturday morning, people on both sides of the political aisle came together to pay tribute to John McCain and his legacy. Presidents Barack Obama and George W. Bush both gave eulogies at the Washington National Cathedral, as did McCain's daughter, Meghan McCain.

Meghan's eulogy for her father was inspiring and pointed. It celebrated her father's life and accomplishments and took aim at the Trump administration, with which her father famously butted heads toward the end of his time in the Senate.

"We gather here to mourn the passing of American greatness — the real thing, not cheap rhetoric from men who will never come near the sacrifice he gave so willingly, nor the opportunistic appropriation of those who lived lives of comfort and privilege while he suffered and served," she said, her voice trembling alternately with sadness and anger.

In one of the most memorable moments from Meghan's speech, she took direct aim at Donald Trump, referencing his well-known campaign slogan, "Make America Great Again."

"The America of John McCain has no need to be made great again because America was always great," she said. This moment was met with great applause from those in attendance, who hung on Meghan's every word throughout her eulogy.

Watch Meghan's speech for yourself below:

This content is imported from YouTube. You may be able to find the same content in another format, or you may be able to find more information, at their web site.
Kayleigh Roberts Contributor Kayleigh Roberts is the weekend editor at Marie Claire, covering celebrity and entertainment news, from actual royals like Kate Middleton and Meghan Markle to Hollywood royalty, like Katie Holmes and Chrissy Teigen.
This content is created and maintained by a third party, and imported onto this page to help users provide their email addresses. You may be able to find more information about this and similar content at piano.io
Advertisement - Continue Reading Below
More From Politics
How to Help Black Lives Matter If You Can't Donate
Does Your State Have a Tampon Tax?
Advertisement - Continue Reading Below
What's Ranked-Choice Voting? Allow Us to Explain
Paid Leave for All Isn't Just a 'Women's Issue'
Yes, Caregiving Is Essential Infrastructure
Unforgettable Signs From the Protests
23 Ways Women Still Aren't Equal to Men
Ma’Khia Bryant: What We Know
Greta Thunberg Expertly Trolled Boris Johnson
The Hope and Heartbreak of Derek Chauvin's Verdict