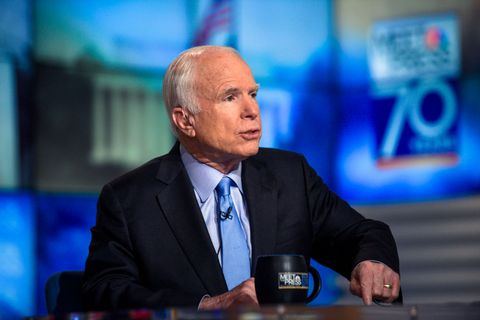 Senator John McCain, a war hero, Senate giant, and former presidential candidate, died on Saturday afternoon. He was 81. His office released a statement on Saturday afternoon confirming McCain's death: "With the Senator when he passed were his wife Cindy and their family," it noted. "At his death, he had served the United States of America faithfully for sixty years."

Even during his struggle with brain cancer, McCain frequently vocalized his resistance to President Donald Trump's administration and many of his policies. After the now-infamous "grab her by the p*ssy" tape was leaked by the Washington Post in 2016, McCain refused to stand by the now-president, breaking with most of his party to do so. "When Mr. Trump attacks women and demeans the women in our nation and in our society, that is a point where I just have to part company," he explained at the time.

A year earlier, Trump had openly disparaged McCain's service during the Vietnam War, saying he preferred "people that weren’t captured." As a young man, McCain had been held as a prisoner of war for five years, suffering torture and injuries that would leave him with disabilities for the rest of his life. He was at one point offered early release, but courageously declined. McCain, who was released in 1973, is universally regarded as an American hero for his service.

McCain served six terms in the Senate, and ran for president twice: In 2000, when he ultimately lost the nomination to George W. Bush, and in 2008, when he faced Barack Obama in the presidential race as the Republican nominee.

In an increasingly heated political climate, McCain was regarded as the rare breed of politician who was affable and respectful to to others no matter their politics, and warranted respect whether you agreed with him or not. During a notable moment in which an observer told McCain that she was wary of Obama for being "an Arab," McCain replied: “No, ma’am. He’s a decent family man, a citizen that I just happen to have disagreements with on fundamental issues.”

His daughter, the television host and political commentator Meghan McCain, posted a statement to Twitter following his passing.

Our statement on the passing of Senator John McCain: pic.twitter.com/3GBjNYxoj5

McCain and his wife of more than 35 years, Cindy, had four children together, and McCain also had three children with his ex-wife Carol. He also leaves behind five grandchildren.

Jenny Hollander Director of Content Strategy Jenny is Marie Claire’s Director of Content Strategy, editing and writing about everything from politics to reality television to accessories and celebrity news.
This content is created and maintained by a third party, and imported onto this page to help users provide their email addresses. You may be able to find more information about this and similar content at piano.io
Advertisement - Continue Reading Below
More From Politics
Meet the Next Presidential Pets, Major and Champ
Who Is Jen Psaki, Biden's Press Secretary?
Advertisement - Continue Reading Below
Bernie Sanders at the Inauguration Is a Whole Mood
The Inaugural Concert Was a Cheesy Balm
Read VP Kamala Harris's Inauguration Speech
No, There Is No Inaugural Ball This Year
Kamala Harris Is "Momala" to Two Stepchildren
Read Amanda Gorman's Moving Inauguration Poem
America's New Obsession: Amanda Gorman
Jennifer Lopez's Bilingual Message Is Important