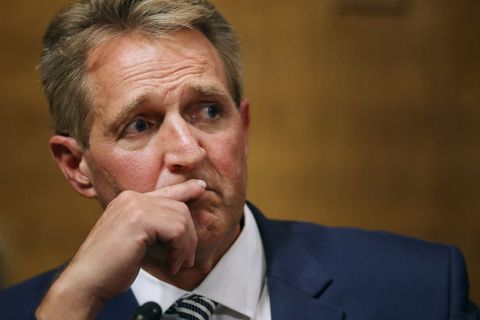 If you were tuned into the Judiciary Committee hearing on Friday afternoon, you may have witnessed a confusing moment: Hours after Senator Jeff Flake, an Arizona Republican, announced in a statement that he would vote to confirm Supreme Court nominee Brett Kavanaugh, he showed up late to the vote and then asked for a delay on the Senate floor vote, pending an FBI investigation. A quick vote along the roll call occurred...and then the hearing was abruptly adjourned.

“What?” said Senator Dianne Feinstein, Democrat of California, as the committee left the room.

What indeed! It was super dramatic and also extremely confusing. Did he get confirmed? Who gets to vote now? Will there be an investigation or not?

A Timeline of What Just Went Down

So What Does That Mean?

Okay, so that’s what happened. What it means is this: The committee voted to confirm Kavanaugh for the Supreme Court, but the Senate vote “on the floor” will ultimately decide whether he becomes a Justice (SCOTUS Justices always have to be voted on by the full Senate).

It's important to note that it’s not actually up to Senator Flake to call for a delay or an FBI investigation—that will be left up to Senate Majority Leader Mitch McConnell and Democratic Senate Minority Leader Chuck Schumer.

What Flake essentially did was make clear that while he was voting to confirm Kavanaugh in committee, if a delay and FBI investigation don’t occur, he would reconsider voting to confirm during the vote on the Senate floor.

Your confusion is understandable. Yes there was a vote. The Senate Judiciary committee approved Kavanaugh’s nomination with Senator Flake saying he would vote yes to pass it out of committee to the full Senate, but could vote no there, unless the FBI investigates. #Kavanaugh https://t.co/7jcBR2ngKW

To some, this was seen as progress—maybe Flake was swayed by the brave survivors who accosted him. But others were less ready to give him props:

It's a lot of drama, and the FBI investigation might not even happen! Senator McConnell has been keen on rushing the floor vote as quickly as possible, saying earlier this week, “We're going to be moving forward. I'm confident we're going to win. I'm confident [Kavanaugh] will be confirmed in the very near future.”

Still, it would behoove him to push for an FBI investigation. With Senator Flake on the fence, and Republican senators Lisa Murkowski of Alaska and Susan Collins of Maine also expressing concern over Kavanaugh, the Republicans can’t afford to lose any more votes in this process, lest they risk Kavanaugh not getting confirmed at all. (The breakdown of the Senate is 51 Republicans to 49 Democrats, with Vice President Pence acting as the deciding vote in the case of a tie. If just two Republicans decided to vote "no" and all Democrats do so as well, Kavanaugh will not be confirmed.)

Basically, consider this a committee confirmation with a caveat, and hope that if an FBI investigation doesn’t happen that Senator Flake will stay true to his word.

Related Stories
Two Survivors Powerfully Confronted a Senator
The Christine Blasey Ford Quote Nobody Will Forget
Cady Drell Culture Editor Cady Drell is a writer, editor, researcher and pet enthusiast from Brooklyn.
This content is created and maintained by a third party, and imported onto this page to help users provide their email addresses. You may be able to find more information about this and similar content at piano.io
Advertisement - Continue Reading Below
More From Politics
In Conversation With Secretary Granholm
Laphonza Butler on What's Next for EMILY's List
Advertisement - Continue Reading Below
Anita Hill Believes We Can End Gender Violence
For Teachers, Going to Work Can Mean Life or Death
Want to Help Moms? Prioritize Menstrual Equity
Abortion Rights Start at the State Level
All of Your Abortion Questions Answered
The Texas Abortion Snitch Site Is Having a Bad Day
The Future of Afghan Women Depends on Us
How You Can Help People in Afghanistan