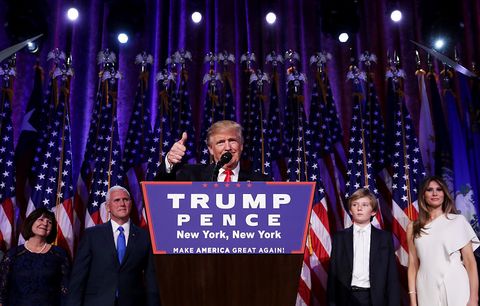 The most widespread reaction on my side of the pond to the 2016 U.S. presidential election has been: "What have they done?"

A lot of people over here in the U.K. and beyond are going to credit the election results with America's resolve to be willingly foolish in the face of really big decisions. (After all, your country elected George W. Bush in 2001 and has persistently failed to tackle the issue of gun violence in the face of 142 school shootings since 2013.) And, on top of that, other—or perhaps the same—people are going to tell you this electoral outcome didn't have anything to do with the fact that Hillary Clinton is a woman.

In both cases, they'd be wrong.

The Real Landscape of Women and Leadership

A grand total of 48 women have held Cabinet positions in the history of America.

As of April 2016, women still hold less than 4 percent of CEO positions at S&P 500 Index companies.

Considering the demand for women's suffrage began in America some time before the 1840s, this progress is pretty minimal—particularly if we look ahead at what can feasibly be achieved for women in the next century. This we know: Every woman in America who has made her way into a leadership position by forcefully tearing through the seams of an enduringly patriarchal tapestry—and that tapestry is alive and well in 2016.

As the narrative goes, the election loss was not about Hillary being a woman, but about her being the wrong woman. But a cursory glance at the America political system still reveals a male-centered reality—in language and in practice.

The President is the "Commander in Chief," a militaristic role still more characterized by hyper-masculine posturing and "Land of The Free, Home of The Brave" war cries, than it is strategy, peacekeeping, and compassion.

Non-veteran candidates have historically struggled to gain traction in American elections, because "serving the country" has become so synonymous with literally fighting for it. Just this year Marco Rubio, Chris Christie, Martin O'Malley, Bernie Sanders—Republican and Democrat candidates alike—faced criticism for their lack of military background.

Interestingly, Hillary famously voted in favor of the invasion of Iraq (which she later says she regrets), a tough stance which ought to have allied her with the warmonger Presidents that have gone before her.

But her vote had the adverse effect—it alienated people, arguably, because it didn't sit well with people's vision of her as wife, mother, and First Lady. Perhaps most tellingly, her vote and regrets underscored her as a human who changes her mind with revealing evidence.

This isn't the first time Hillary's "personality" has been deemed problematic for voters. Having had her legal training in an era of pronounced misogyny, she learned to be tough and impenetrable as a coping mechanism—but it was exactly this coping mechanism, which has carried her through a thorny professional life, which 2016 voters have proclaimed "unlikeable."

To be clear, Donald Trump is not "likable," but he's a man—he doesn't have to be.

The Plight of Middle America

We know who ferried Trump into office—and his successful win falls along clear, racial and socioeconomic lines:

Let us be crystal fucking clear who is responsible. pic.twitter.com/aaj3nkvdKO

But this essential question remains: how did they get there?

The vast swathe of Middle American states that voted for Trump is brimming with people who have suffered, often completely voicelessly, at the hands of a country that has failed to give them significant access to education, to bring them convincingly above the poverty line, to effectively address racial tensions, and to bring an end to the terrorism (both domestically and abroad).

One can only assume that the women who came out in droves to vote Trump did so in a desperate attempt to preserve what they know—to maintain what little security they felt Trump could offer them in a world that, recently, hasn't offered very much. Quite literally, this is a demographic that has struggled to keep food on the table, and perhaps voted to do so even at the cost of their sexual and reproductive rights. That says a lot about the status of the United States of America.

We must look first to the system that has failed them over and over again.

This Problem Now Belongs to All of Us

Americans, do make the mistake of thinking you are alone in your future. If the Brexit decision in the UK taught us anything this year, it's that discontent, desperate suspicion, fear-mongering, and panicked decision-making is widespread and dangerous.

Just this morning, right wing French politician Marie Le Pen startled all of us with her advocacy of the Trump rein, announcing her plans for France to follow suit. Marie Le Pen's father, founder of Front National, Jean-Marie Le Pen proclaimed: "Today, the United States, tomorrow, France. Bravo!," with the party's Vice President claiming: "Their world is collapsing. Ours is being built."

The global challenge we now face is much bigger than Hillary's likability—it's unbridled suspicion of women, of different ethnicities, of terrorism, of anything identifiably "other." If not harnessed, this growing distrust could be our international undoing.

And we all have a responsibility to make sure that doesn't happen.